Charlize Theron threw a baby shower for her good friend Emily Blunt at her Hollywood Hills home over the weekend.

Blunt, 33 is expecting her second baby with husband John Krasinski, 36 – they are already parents to daughter Hazel, 2.

Blunt and Theron have become close friends since starring alongside each other in the movie The Huntsman:Winter’s War which also stars Chris Hemsworth.

Actress A.J. Johnson was in attendance at the garden party and posted a lovely pic with the pair on Instagram, captioning it, “An afternoon of love, laughs and friendship celebrating a special piece of my [heart] #EmilyBlunt with hostess with the mostess @charlizeafrica.” 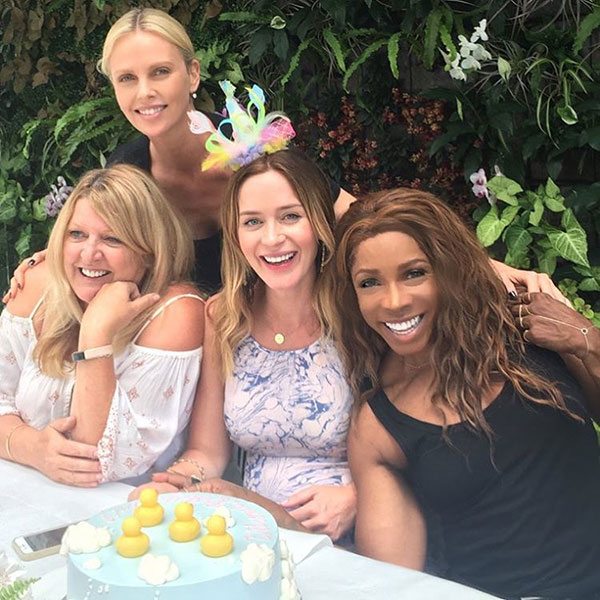 Blunt, has not publicly revealed the sex of her baby, so the cake had pale-blue icing and was topped with yellow ducks. However the party decorations may have hinted to the baby’s gender. A source at the party said:  “Everything at the party was done in shades of light pink. There were pink balloons and light-pink floral centrepieces.”

The actress has spoken in the past about her second pregnancy and how it differs greatly from her first.
“The first pregnancy is the most self-indulgent thing in the world because you get massages and prenatal yoga and hypnotherapy CDs,” she said. “During this one I forget that I’m even pregnant. I’m hoisting my 2-year-old around!”