Popular E News television presenter Maria Menounos, 39, is now on the mend after undergoing surgery to remove a brain tumour the size of a golf ball.

The journalist and television presenter told People magazine, “This February I thought I had an ear infection so I went to a doctor, and he said, ‘Your ears are the cleanest things I’ve ever seen. What else are you feeling?’ I’d been getting light-headed on-set and having headaches. My speech had gotten slurred, and I was having difficulty reading the teleprompter. I said, ‘I know you’re going to think I’m crazy, but I think I have a brain tumor like my mom.’ He said, ‘I don’t think you’re crazy. Let’s just get an MRI.” 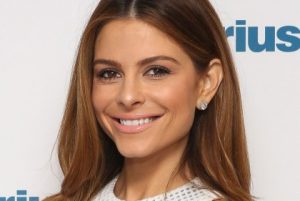 Maria has stepped down from her position at E News in order to recover.

“The next week I started feeling better, so I was like, ‘I’m clearly paranoid.’ So I kept pushing the MRI.”

Although a scan in April uncovered a benign brain tumour called a meningioma.

Maria informed her parents of her diagnosis only days before her surgery which was scheduled on June 8, her 39th birthday.

“Both of them just welled up,” she recalled. “They were just in shock, but we kept reassuring them it would be fine.”

She explained that her doctor removed “99.9 percent of it,” but said there’s a 6 to 7 percent chance her tumor will return. “I’ll take those odds any day,” said Maria.

Awaiting our next orders 😝! In a few minutes I turn 39! 39 will be the year I change my life in many ways. 39 begins a new chapter. Living my true purpose, living my life exactly the way I want to and with those I love. I'm so blessed to have amazing friends and family who love and support me. Who throughout my moms health crisis have been there for us. That's when you know who is who in life:) even though the current circumstance have been challenging, we will get through. I believe and I have faith. 🙏❤️⭐️

After three years with the E News network, Maria announced that she will be taking some time off to recover with her fiance Keven Undergaro.

“I don’t have my balance fully yet but as long as I’m holding on to Keven, I’m sturdy and fine. My face is still numb. This is something that takes at least a month of healing, but I’m getting stronger and stronger every day and I’ll be back to normal very soon.”

“Luckily I don’t need any further treatments but I can’t say the same about my mom. So please keep her in your prayers.”

First I wanna say thank you all for the well wishes, prayers and support. It's been a crazy time here in our home. I want you all to know that I'm ok! Seriously I'm recovering well and should be as good as new very very soon! Luckily I don't need any further treatments but I can't say the same about my mom. So please keep her in your prayers. I also want to thank @people for allowing me to share my story. @juliejordanc & @mrjesscagle THANK YOU' Next-I need to thank everyone at @cedarssinai everyone there has been amazing. Most people want to rush out of the hospital to get home I kept saying I've never been treated kinder. I cried like a baby saying goodbye to the amazing nurses who took such good care of me. God bless nurses! I of course need to thank dr black and dr Chu for performing an amazing surgery and giving me the best bday gift ever-my health. And lastly, god has blessed me in so many ways but this too was a blessing. I got to hear what I have meant to my friends and family-it's been quite moving for me. I want thank all of my incredible friends, family and even strangers who have shown me and my family such kindness. @alyssawallerce Thank you for being with me every step of the way. I couldn't have done it without you. @iamjoegear You too! And to @undergaro the best nurse in the world..you never left the hospital and slept by my side there. you are my everything and I'm so thankful to you. You and dad have really been incredible to mom and me. You both have inspired me. I've never been more excited about life. I see so much so clearly. Will share more with all of you soon! Xo