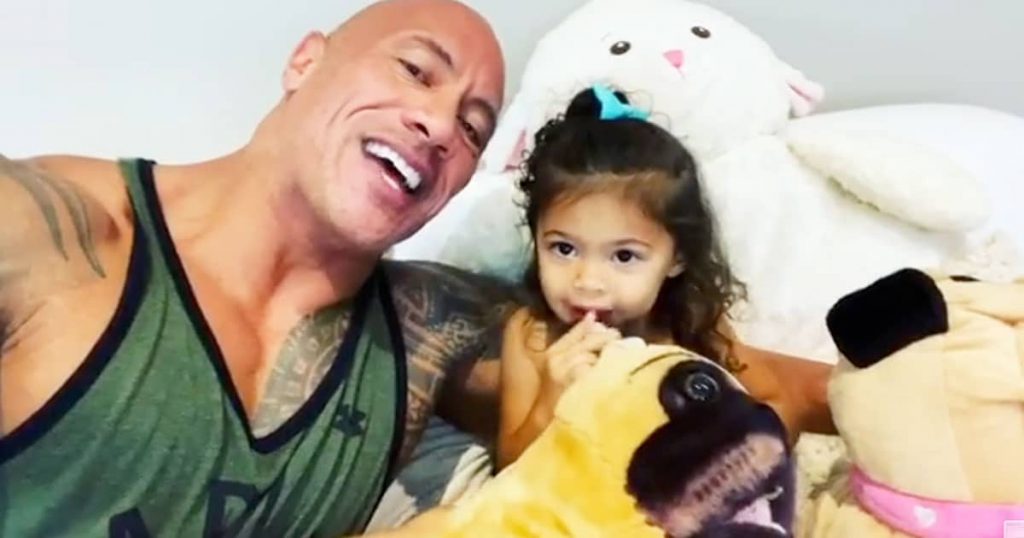 Little girls often look up to their daddies as though they hung the moon themselves. The love and admiration in their eyes form a bond that is hard to break, coining such phrases as “daddy’s little girl” and “she’s got her daddy wrapped around her little finger”. The Rock’s daughter obviously adores her father too but refuses to believe that he is actually one of her heroes.

Dwayne “The Rock” Johnson has three gorgeous daughters and his youngest Tia still cannot be convinced that her father is actually Maui from her favourite movie “Moana”. She just flat out refuses to believe him when he tells her that he is Maui. And it’s just so adorable we can’t help but be absolutely smitten by the pair of them.

Back in April, The Rock shared this sweet video to his Instagram account trying to convince Tia that he was the popular shape-shifting Polynesian demigod from her favourite movie.

And for the 937th time today she wants daddy to sing along with Maui. She has no idea, we’re the same person. And I have no idea what day it is anymore, but I am sure it’s one that ends with Y. To all the mama and papa bears out there going thru it – we understand. 24hr parenting. Get your sleep and cocktails when you can. #BringItOnBaby 👶🏽👶🏽🤪❤️🥃💤

He gave it another attempt in May…

Never mind. She still refuses to believe the urban legend that her daddy is actually, Maui. At this rate it’s even pure speculation that her daddy is also The Rock. I’ll happily take these L’s and laugh as long as I get my daddy/daughter bond 😆💪🏾❤️ #3000timesandcounting

With two-year-old Tia remaining firmly in denial, the superstar father recently gave it another go.

Could this be the glorious day my sweet baby Tia, finally accepts that her daddy is the demigod, Maui from MOANA? After repeatedly requesting, “sing to my doggies daddy” I have a good feeling about this one 🤞🏾 Aaaaaaaand that’s a very firm, NO. Even the doggies are callin’ BS 😂 Enjoy your weekend, my friends! 🤙🏾

We’re not sure if little Tia will ever truly believe that her father is a demigod (in many aspects) but we sure are enjoying his attempts at trying to get the message through!