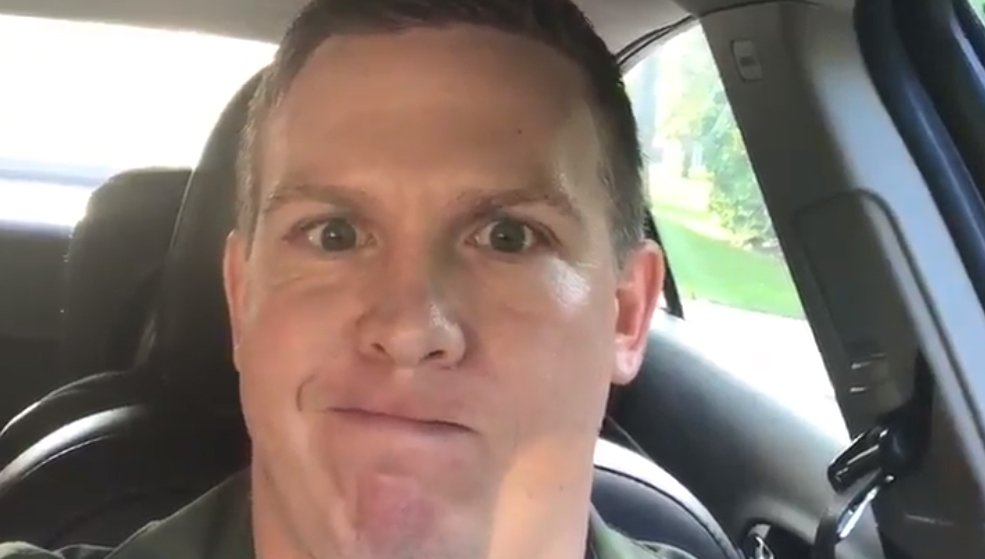 This dad has learnt a very valuable lesson about swearing in front of his almost two-year-old son, Joel.

James LaPorta is a former Marine who served two tours in Afghanistan. He’s also a military reporter and freelance journalist for the Washington Post, but now he is famous for being the father of the obscenity-screaming toddler on Twitter.

The video of James’ son repeatedly saying the F-word as his dad helplessly stares at the camera has gone viral, and the embarrassed dad is now reconsidering his own vocabulary.

Beware, there will be many hilarious f-bombs dropped in the following clip:

As a former U.S. Marine, now a father, there is perhaps one word I should try to cut out of my vernacular around my soon to be 2-year-old. 😐 pic.twitter.com/HSQZN7bHVn

Ohh dear. It’s funny when it’s not your kid, isn’t it?

“He probably learned it from me,” LaPorta admitted to HuffPost, although he did reveal he’d been “trying really hard to curb my language around him.”

The amusing footage has since gone viral, with many commenters sympathizing with his predicament. Others have even suggested other non-curse words for him to use in front of his child.

You might want to choose a one-syllable word. My stepmom used to say fudge. So you can still change direction mid word. That’s pretty useful

My 2-year old recently muttered “fucking car” at an intersection and it filled me with pride and then shame and then pride again.

Just tell everyone that your toddler watched “Casino” without your knowing about it. 😉

First time my son said it was in front of my mom. I told her he was trying to say FireTruck. Mom laughed, wife did not. #reallife

Brother, I’m sorry, but that is the hardest my wife and I have laughed in awhile! Hang in there, it only gets better!

“The reactions have been extremely positive,” the former soldier told Scary Mommy. “I’m glad I’m not the only one who goes through this.”

You’re absolutely right about that, James! Happens to the best of us.