A stay at home mother of six, Rebecca Wanosik has been attacked on social media after she posted a photo of her breast feeding two babies while they held hands.

Looks pretty natural and beautiful right? So why did the 30 year old receive such horrible backlash on her Facebook post?

Well as it turns out some people didn’t like the fact that she knew only one of those babies. Rebecca says on her Facebook page that she got a “text from one of my friends asking if I could feed a strangers baby. Was there even a question.”

The mother of the child was undergoing a surgical procedure and couldn’t feed her exclusively breast fed 5 month old and Rebecca could. So she did.

The mother of six who has breast fed all of her children and also owns an online lactation cookie business says she also had an “atrocious” year in 2015 when all of her children were taken away from her for ten long months when she says Child Protection Services mistook her then 9 week old baby’s rare  connective tissue disorder and Vitamin D deficiency that can cause broken bones and severe injuries as child abuse.

Wanosik says “Last year was atrocious, and it’s why I am adamant about feeding a baby whose mother can’t get to her.”

Facebook didn’t agree and disabled her account and after being allowed back on the social media was taken aback by some of the comments on the photo. She was labelled a Paedophile amoung other horrible things and said “People said some really hateful things. It was awful.”

She wrote on her page on the 7th October “They are boobs, they are meant to feed babies. Regardless, I took an amazing photo tandem nursing these two babies together and it shows hungry babies don’t care, they just need to be fed.” 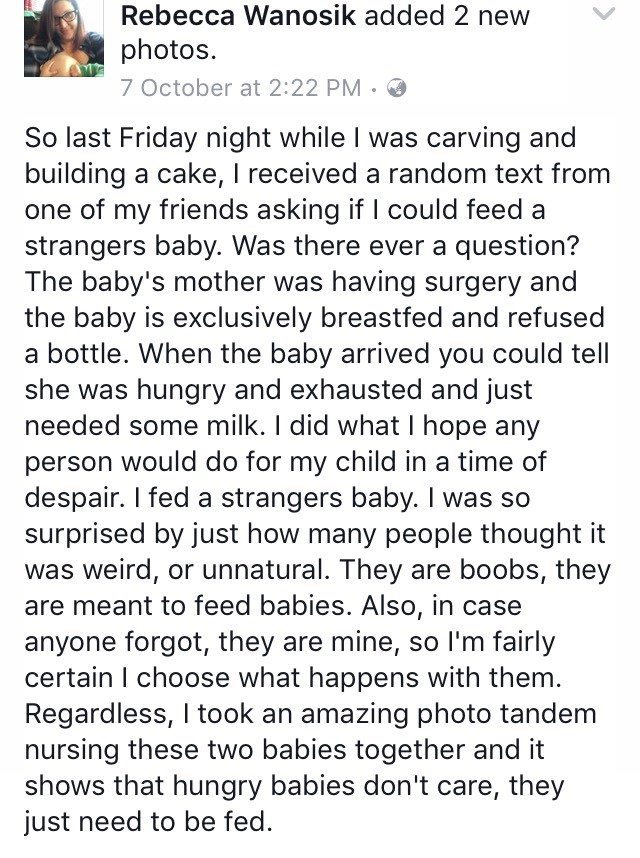 So why is a woman who has selflessly gone out of her way to help another human being, received this hellish backlash instead of being praised for doing something that is so natural?