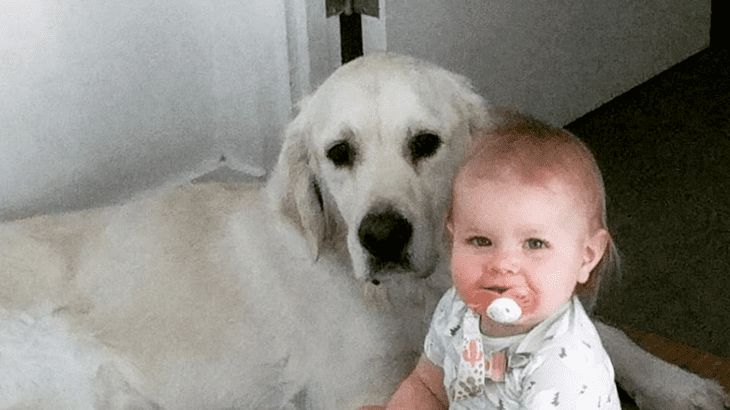 If it’s one thing that parents love, it’s a child that sleeps in every morning. Or at least wakes up at a reasonable hour and keeps the noise levels at a dull roar. Let’s face it, no one likes an early bird when you’ve been up with the little ones all night!

One couple found their little toddler in the hallway early in the morning, and couldn’t figure out how she managed to reach the door handle to open her bedroom door.

Fifteen-month-old Chloe Cardinal amazed her parents Chris and Nina by letting herself out of her safely closed bedroom door, prompting them to wonder if she had suddenly experienced an untimely growth spurt.

“We were shocked! How was she able to get out of bed?” Chris told ABC News. “This is the first time she’s ever made an escape like this. Did she grow?”

The couple went to the babycam footage and quickly realised that their little girl had two very large, very fluffy accomplices.

Watch as the family’s golden retrievers, Colby and Bleu, arrive bright and early to bust out their favourite little buddy:

Oh my that is quite hilarious! Look how happy they are with themselves, all three of them!

The video shows Colby and Bleu use their noses to open their little friend’s bedroom door, then jump into bed with Chloe to play. Once they got Chloe awake, the pups ran in and out of the room, snatching her stuffed toy, and encouraging her to follow them.

Oh, right. Yes. She is known to sneak them doggy treats!

Now the Cardinals will have to figure out how to puppy-proof their home, as well as baby-proof it! Something tells me that this trio isn’t done with their hilarious hijinx just yet!