Parents who currently use, or are thinking about using an amber teething necklace on their child are being urged to heed the warning of 26 year old mother Ashleigh Ferguson shared on the SIDS and Kids Facebook page.

Ellie, had been wearing the amber teething necklace for 9 months – both day and night during sleep. Ellie’s mum ensured her cot was free of hazards thinking that the use of the teething necklace would be safe under those circumstances. One morning when she went to check on Ellie as she was sleeping longer than usual, she found that her daughter had managed to loop her arm through the necklace putting pressure on her arm and neck. The necklace did not break with the added pressure. When the necklace was removed Ellie was left with marks on her arm and neck. Had the pressure of the necklace been in a different location on her neck the results may have been very different. Ellie’s mum has kindly shared images to further illustrate the risk and danger of using the product. 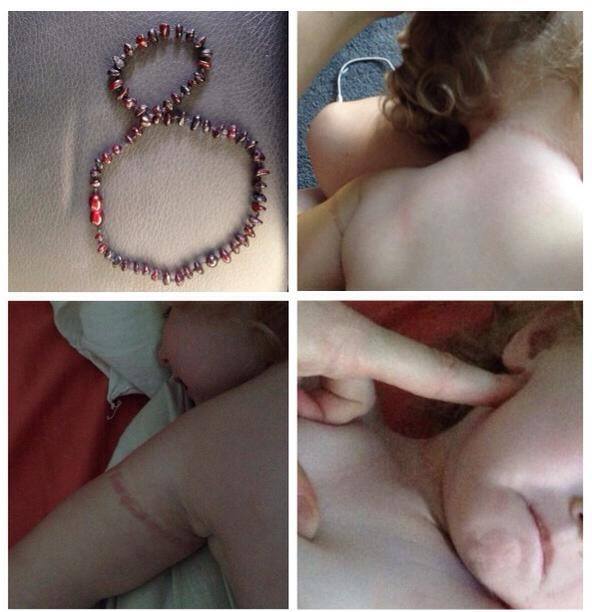 Despite the Parliamentary Secretary to the Treasurer, David Bradbury, warning notice to the public back in 2011 regarding the use of amber teething necklaces the products popularity as continued to soar.

Amber teething necklaces and bracelets consist of amber beads which are a fossilised tree resin and range in colour from yellow to white and beige to brown.

The warning notice was issued after ACCC testing of several of these products indicated that they could break into small parts and present a choking hazard to children under three years of age.

Suppliers claim that when worn close to the skin, succinic acid will be released by the amber beads to relieve the symptoms of teething. Some suppliers also make claims for other conditions including eczema and asthma.

Consumers using this product are advised to:

Despite the plethora of anecdotal reports from parents as to the efficacy of the amber necklace as a natural pain relief for teething babies, there is no scientific evidence to support this claim.

Professor Allan Blackman, Chemistry Professor at Otago University in New Zealand has dismissed claims that any beneficial oils are released into a teething child’s bloodstream from the amber.

“Amber does contain succinic acid but it is not very volatile so you would have to heat it to at least 200C to get it out of the amber and into your baby’s blood stream which is not going to happen when baby’s temperature is 36.9C.”

Parents are urged to reconsider the risk posed by use of amber teething necklaces. – Does the unsubstantiated benefit outweigh the risk (which in this case is potential strangulation)?

Visit the SIDS and Kids website for more information