Emilia Grabarczyk has been called “The Little Fighter” after being born at 26 weeks gestation and weighing in at a tiny 8 ounces.

Emilia was delivered via an emergency Caesarean section in West Germany after Doctors were concerned for her survival when they discovered the placenta was not providing her with enough nutrients. Shocked and devastated, her parents Lukas and Sabine Grabarczyk said that not once did they doubt that they would give their daughter a chance at life, even though the odds for her survival were so low.

A baby born at 26 weeks gestation would normally weigh around 21 ounces or 595 grams, little Emilia was born weighing 8 ounces or 226 grams and was immediately at an increased risk multiple long term complications; Cerebral Palsy, Vision and hearing impairment, learning and behavioural issues. However her parents say that they have seen no sign of the possible long term issues but will need to see how she develops into childhood.

Dr Bahman Gharavi, head of Children and Youth Clinic at St Mary’s Hospital says that Emilia’s birth and survival is “Truly unique” and said “Even children with a birth weight of 14 ounces rarely survive. We have to thank Emilia as well for her own survival. She is a little fighter. For more than six months, it was unclear whether she would survive. Only in recent weeks she is getting more robust.” 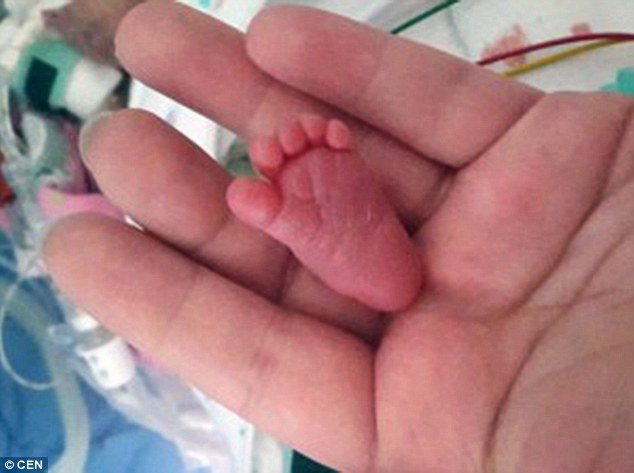 Weighing in now at 7lb 2oz or just over 3.1kg, Emilia is 9 months old and has only just reached a healthy weight for a newborn baby. At birth she was 22cm long and has already survived abdominal surgery when she was a mere 12 ounces in weight.

Emilia is believed to be world record holder already as the smallest surviving premature baby. The previous record holder was Rumaisa Rahman who was only 8.6 ounces when born at 26 weeks gestation in Chicago.

Her very happy mum Sabine said “There were many difficult days and many tears, but she clearly wanted to survive”