13yr Old Girl With Ulcerative Colitis Refused Use Of Toilet

A frustrated mother has taken to Facebook after her 13 year old daughter was refused use of a toilet. This happened at a “White Stuff” store in the UK. Despite having proof that she suffered from Ulcerative Colitis, a form of Inflammatory Bowel Disease.

Ulcerative Colitis is a condition where the colon and rectum become inflamed. Symptoms include recurring diarrhoea, abdominal pain and needing to empty your bowels frequently.

Emma Bryant left a post on the White Stuff’s Facebook page. This occurred after a staff member refused to allow her 13-year-old daughter access to their toilet.

Even though her daughter held a “Can’t Wait” card, and showed staff, access to the toilet was still denied.

“They refused as they said they had stock out the back and suggested she used the nearest public toilets,” Emma wrote on Facebook.

The IBS Network produce a similar ‘Can’t Wait’ card and their website states: ‘Whilst the card is not guaranteed to give you access to toilets, the cards are widely accepted and acknowledged.’

Upon being denied access, Emma’s daughter rushed to the nearest toilets. Although “sadly and very embarrassingly she had an accident as she couldn’t hold on”.

Emma’s mum wrote that the incident put a big dent in her daughter’s confidence. Happening as she was only just getting used to going out in public with her latest flare-up of the disease.

Although receiving an apology from White Stuff, Emma is still upset over the incident. She is however, encouraged by the amount of attention her ordeal has received.

Metro reached out to White Stuff for a comment and their CEO, Jeremy Seigal got in touch:

‘In response to the recent situation, I would like to say how sorry we are for the poor experience that our customer had in our Southampton shop,’ he said.

‘We strive to be a welcoming and personable retailer and apologise that on this occasion our customer was let down.

‘We have apologised to the customer and, going forward. Will ensure that the correct training is carried out to prevent this happening again.

‘In light of what has happened we will also be making a donation to the charity Crohn’s and Ulcerative Colitis UK.’ 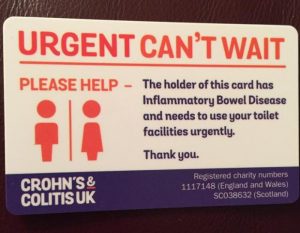 “This can only be a positive to highlight and make as many people and businesses aware of this awful chronic disease. And what ulcerative colitis sufferers have to go through on a daily basis,” she told metro.co.uk.
“Also, it highlights the importance of the ‘Can’t Wait’ card to sufferers. Which makes going out to public places possible. So I dearly hope lots of positive comes out of this horrible experience for my daughter.”

This isn’t the first time an incident involving an invisible illness, has made headlines.

There was a woman’s open letter then went viral after she was tutted at for using the disabled toilets which also put Inflammatory Bowel Disease on the map.

These incidents go to show that we all need to make an effort to be more informed and aware of invisible illnesses and what they entail.