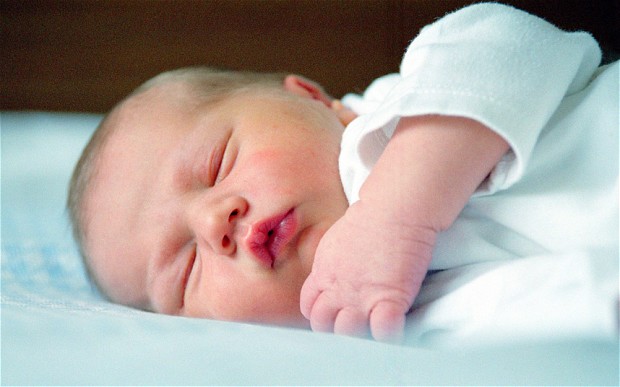 According to new figures, as many as 1,403 newborns have been classed as obese in the UK since 2011.

9lb 15oz or more is classed as obese and nearly 400 babies have been born in the past four years tipping this weight.

Toddlers are also being hospitalised for being obese, with 28 two-year-olds and 33 three-year-olds admitted since 2011.

Tam Fry of the National Obesity Forum says that some mothers may suffer from medical conditions, but most just over eat.

He said: ‘Quite simply, the number of pregnant women who are obese at the start is increasing. It is thought that 82 per cent of children who are obese will continue to be overweight. As they have the same kind of nutrition as their parents there is a continuous upwards spiral.’

Mr Fry also suggested that the number of women having cesareans was increasing due to the increasing size of their babies.

A Royal College of Midwives spokesman said: ‘It starts pre-conceptually. If a woman is trying to get pregnant then she should already be eating healthily and not drinking or smoking.

‘It is a common myth that the woman should eat for two. Really, she should be just taking in lots of vegetables and a balanced diet. Long walks and gentle jogs can also help.’