A Dad Plays the Ultimate Prank on His Wife, Convincing Her The Family Have Shaved Their Heads

If you’re going to play a prank, April Fool’s Day probably isn’t the best day to do it because EVERYONE knows nothing is real on April Fool’s. Or do they?

We all know timing is everything when it comes to playing a prank on someone. And Bobby Wesson from Alabama knew he timed his prank perfectly when his wife, Rayena, had a calm shift at the hospital where she worked.

Bobby told Scary Mommy, “I waited a while to pull the trigger on this prank.”

“I’d had these pics ready for a month but, like I said, her easy nights are few and far between. Sometimes she doesn’t even get to sit down much less sit down and eat.”

To set the scene, Rayena is at work and she’s on a lunch break at the hospital. Bobby knows their son’s picture day is coming up so decides to run his prank when he finds out his wife has time to text.

The story was shared on Facebook, captioned, “Sometimes Rayena leaves me alone with the baby.”

What proceeds is a scurry of text messages between the husband and wife as Bobby reveals to Rayena something terrible has happened to their son, Deacon’s hair.

This in itself is traumatic as Deacon is their only child and he has the most gorgeous hair. Deacon doesn’t just like anyone touching his hair. His parents drive him to a hairdresser 45 minutes from their home so he can get a haircut. The toddler’s hair is a BIG deal. 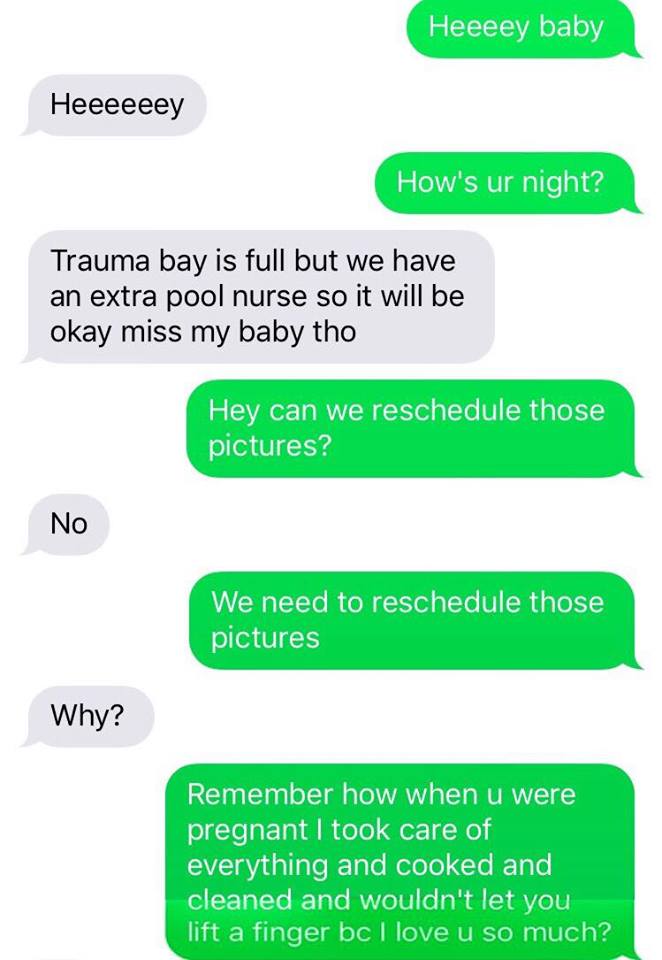 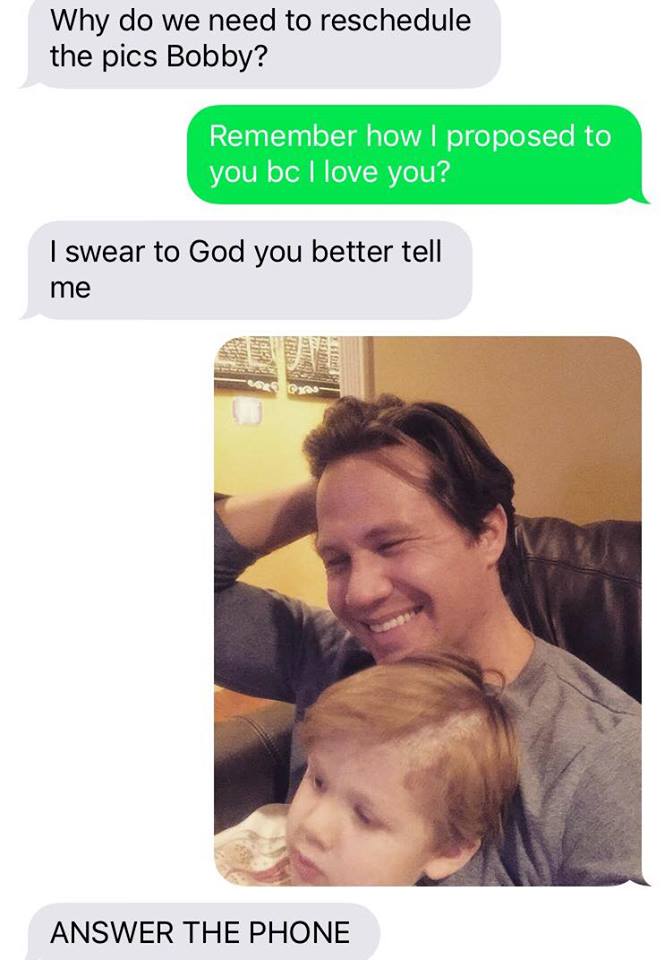 So Rayena completely loses the plot when she gets told her baby has shaved his head using Bobby’s trimmers. 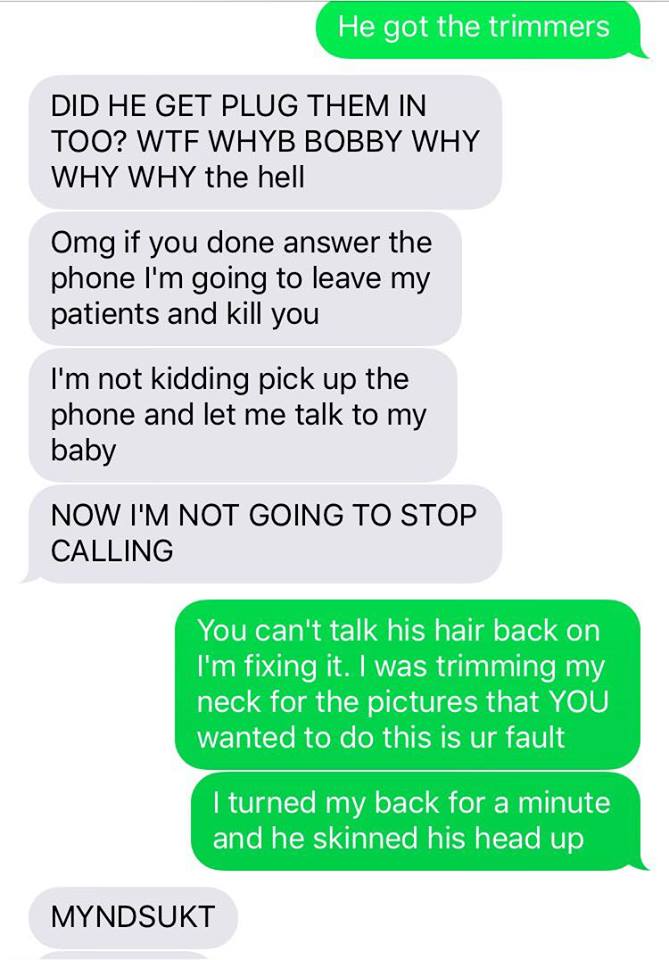 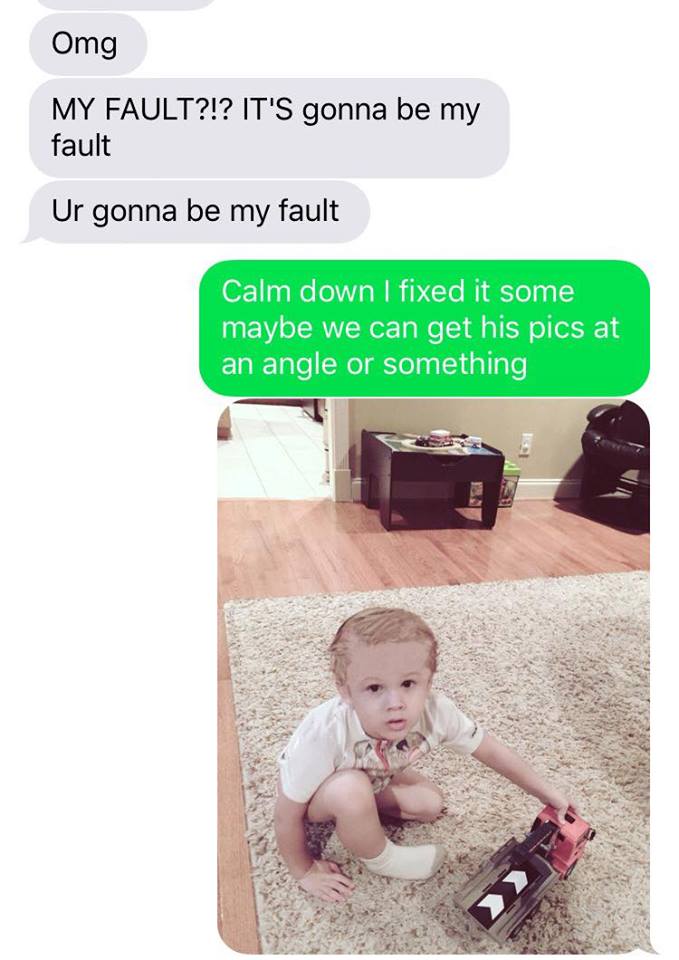 Bobby plays the concerned daddy well and shares a picture of Deacon under a duvet, hiding because of his new ‘hair do’. 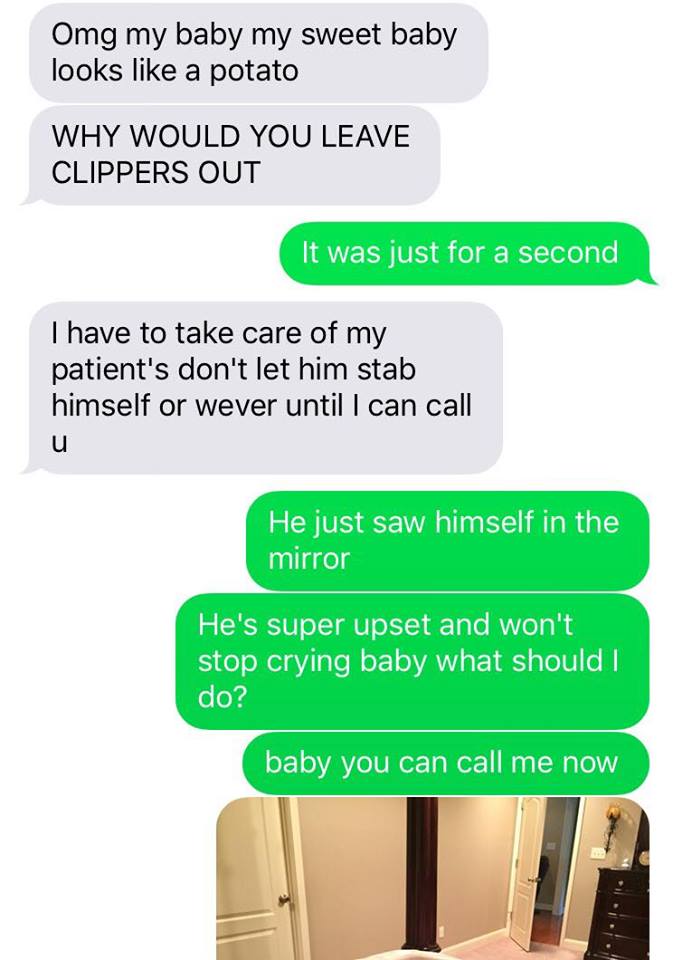 Bobby then writes to Rayena, “There’s only one thing for me to do to make him feel better. I’m going to shave my head too.” 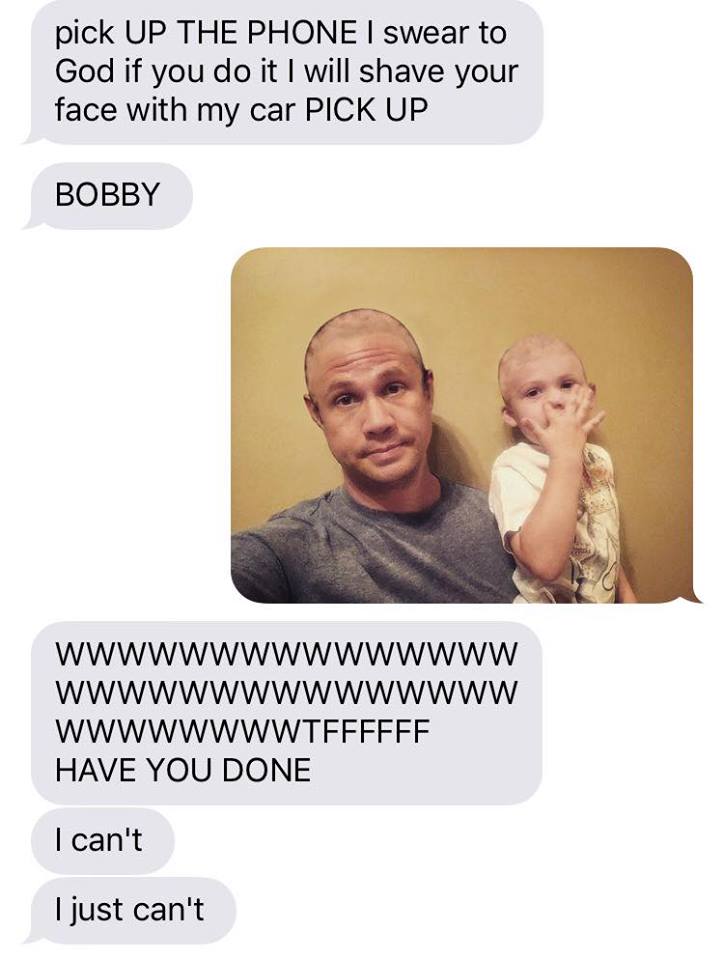 “I tried to get some friends to do it and when they didn’t look good enough. I paid couple of people on Fiverr to give it a shot. No one could get it right so I just started watching tutorials and reading blogs and after a couple of weeks I finally had something I thought would be convincing.”

And it was very convincing. So convincing Rayena gets MAD. So mad she can’t text properly.

“She is normally a good speller,” Bobby laughs. “She was so mad she was shaking.” 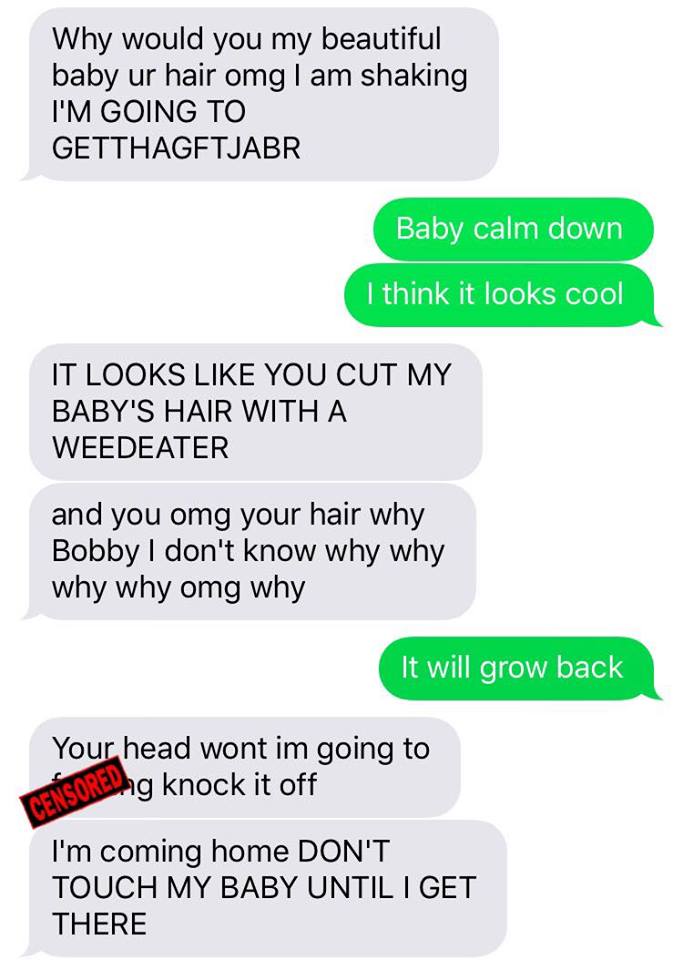 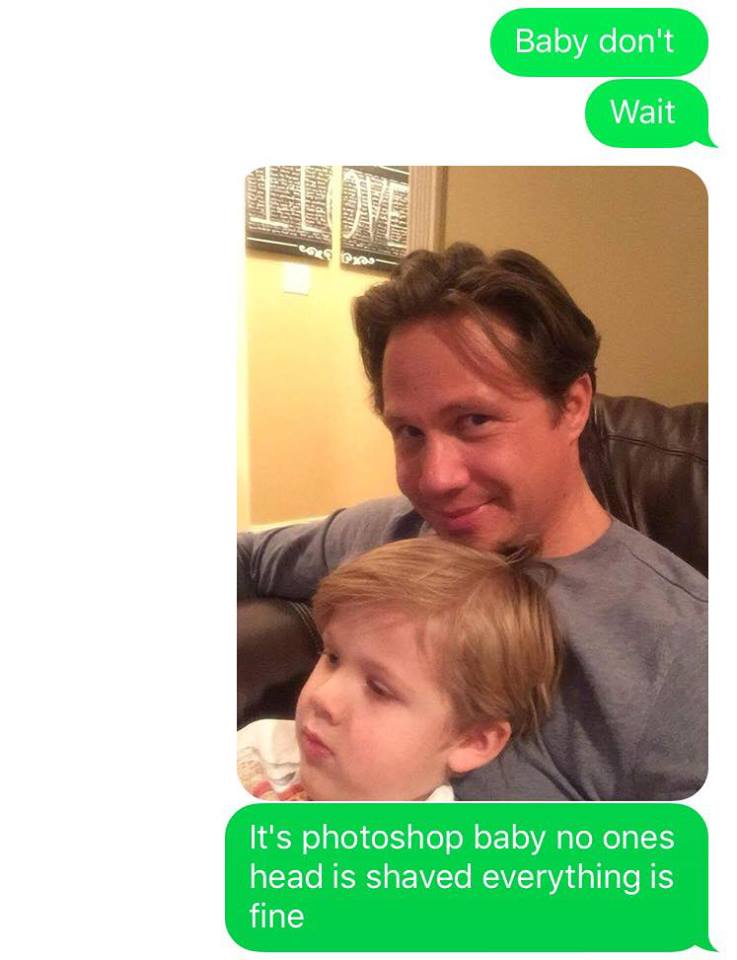 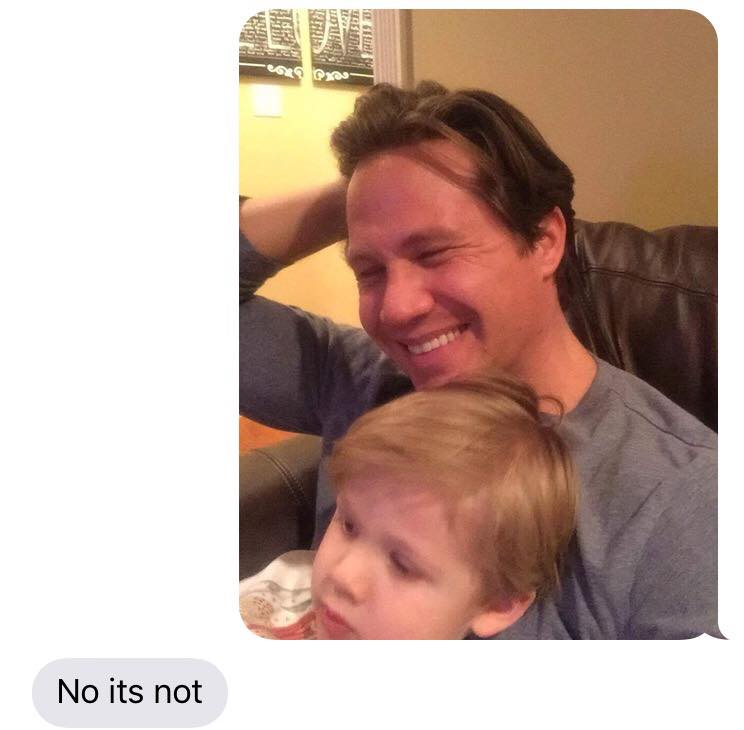 The prank ended with Bobby admitting it was a prank, but Rayena is not impressed. 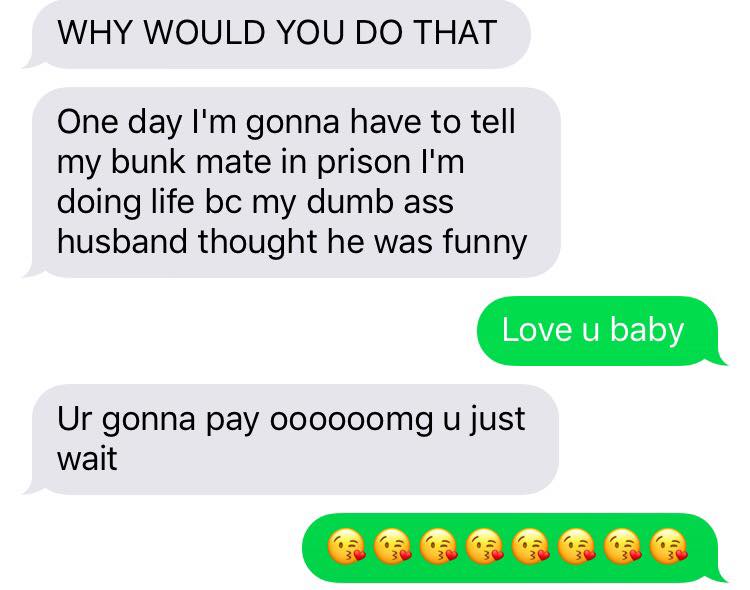 The next day Bobby shares a photo with his fans and this comment,

“Weeeeell dang haha good morning everyone I lived through the night.” 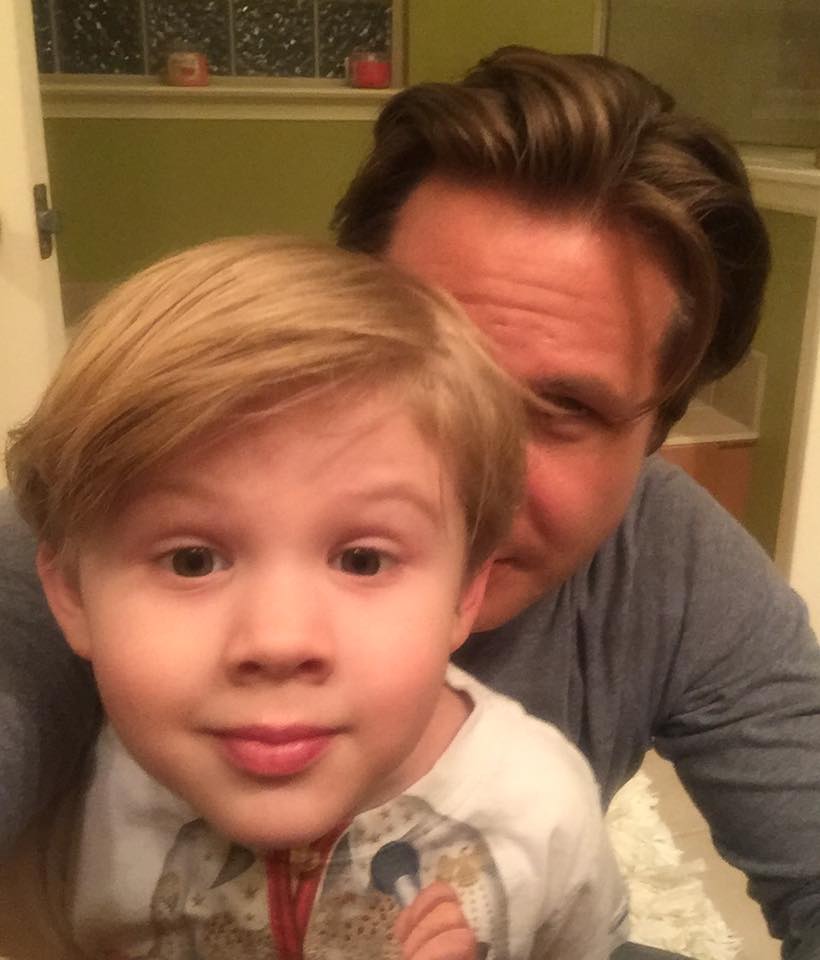 This is not the first time Bobby has played a prank on his wife, nor she on him.

“This wasn’t the first time Rayena’s been pranked,” Wesson explains. “Nor was it mine. I lost a bet that ended with having Rayena’s name tattooed on my butt last year.”