Mother Says She Chooses To Keep Her Daughter Away From Overweight Teachers!

A mother in the UK chose to not have an obese assistant teaching her child at nursery school and promptly moved her to another class.

Hilary Freeman, a writer and London-based mum, says the teacher’s weight wasn’t the right message she wanted to send to her child..

“The nursery assistant was clearly a lovely woman, kind and great with children. But as I watched her play with my two-year-old daughter, I felt a growing sense of unease,” Freeman explained in her  essay explaining her stance.

“The assistant was only in her 20s, but she was already obese—morbidly so. She moved slowly and breathlessly, her face flushed,” Freeman continued.

The mum goes onto to say that she doesn’t feel it’s fatism to want another teacher. Instead Freeman says it has everything to do with her daughter’s safety and exposure to unhealthy habits.

“Would she, I wondered, have the lightning reflexes needed to save an adventurous toddler from imminent danger? And what sort of unhealthy habits would she teach my daughter, who would be eating her lunch and tea there each day?” Freeman asked.

The assistant wasn’t the only overweight member of staff at the school and Freeman was concerned what kind of message her daughter would be getting. Would she think that being overweight is normal and accepted perhaps? 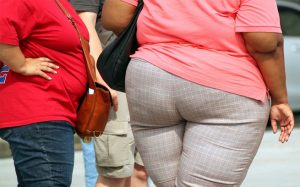 Freeman’s personal essay, has many people accusing her of “fat-shaming.” However she says there is no way being morbidly obese is a lifestyle choice that is healthy in any way. In fact she says society needs to stop celebrating fat people and suggesting obesity is a healthy way of life.

“Perhaps I feel so strongly about this because I’m a slim person with a far person inside, wanting to burst out.”

The mum goes on to say that the reason she is a size 10 now is because she eats well and exercises regularly. She was once a size 14 because of an underactive thyroid that makes it hard to lose weight and can cause severe weight gain. Her grandmother was also morbidly obese – a lifestyle Freeman does not want to hand down to her own daughter.

“Research has proven that, in many ways, being obese is as unhealthy as smoking. It causes cancer, heart disease and diabetes and can impede fertility. Studies also disprove the notion one can be fat and fit. The heavier you are, the more likely you are to suffer from heart failure or stroke,” she says.

“Discrimination is never good,” she says. “But neither is obesity. So let’s stop celebrating it, and instead offer a bit of tough love.”

What do you think? Does the mother have a right to be concerned?