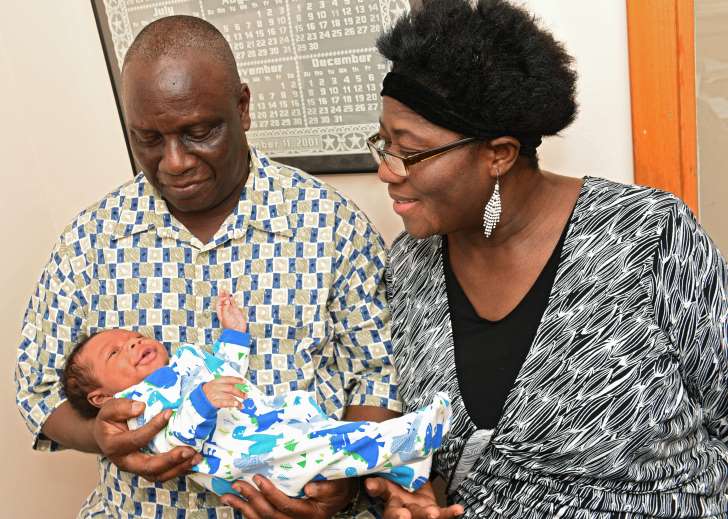 After nearly four decades of marriage, a couple in the US have become parents for the first time due to IVF.

Akosua Budu Amoako, 59, and her husband Isaiah Somuah Anim also 59, had tried to fall pregnant naturally after they were married 38 years ago. But the couple were unsuccessful in starting a family and eventually stopped trying.

It wasn’t until last year they heard the news of a 60-year-old woman from their homeland of Ghana, give birth to triplets after fertility treatments, that they decided to have another try. This news gave the couple renewed hope and they decided to try again to have a child.

The couple underwent in vitro fertilization, using a donor egg and Anim’s sperm. The process took the couple a year to fall pregnant and Budu gave birth to a baby boy last month, named after his dad, Isaiah Somuah Anim.

Dr. Khushru Irani delivered the baby, born on June 15 weighing 7-pounds, 4-ounces. Initially the doctor had concerns about process due to the age of his patient and the possibility of complications.

“Initially, when I saw her, I’m saying no, it’s not a good idea for your health to have a baby at your age,” the doctor said. “But they were very insistent and they wanted to try it out.”

So far the baby and mum are doing well. Dr. Irani told The Associated Press, “They’re doing super, very well”, and the couple “are so happy about the whole thing”.

The couple came to the United States in 2005 and are naturalized U.S. citizens, making their son ‘born an American, and a New Yorker.’

Budu admitted to the Times Union, “We haven’t gotten much sleep, but I feel fine and I think he already knows our voices.”

Congratulations to Budu and Anim on the birth of their son, Isaiah.