Minnesota Mother of two Tammy Van Dyke is seeking $50,000 in damages from the Maternity hospital where she delivered her baby. 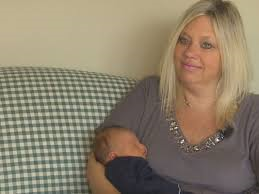 In 2012 Ms Van Dyke delivered her son Cody at Abbott Northwestern Hospital and everything was going along smoothly until the hospital staff accidently placed her newborn son in the room with another mother who thought the child was one of her twins and started to breast feed him. While Tammy slept, her baby was in the nursery when the staff placed him in a bassinet belonging to another baby.

Ms Van Dyke is seeking the money and suing the hospital and claiming it ‘negligently failed to care.’ Because breast milk is a bodily fluid and can carry any virus that the person has both the Mother who breastfed the baby and little baby Cody had to endure multiple blood tests for the entire year to ensure that no HIV and Hepatitis were of no concern. Luckily all tests were negative.

In an interview, Ms Van Dyke said “Never in a million years would you think this could happen or would happen”

“My advice would be – and I’m sure this is a rare occurrence and never happens – is don’t put your baby in the nursery because you don’t know what could happen,” she told the Minneapolis Star Tribune.

The Abbott Northwestern Hospital are now using an electronic system of checking all patient’s identification bands.