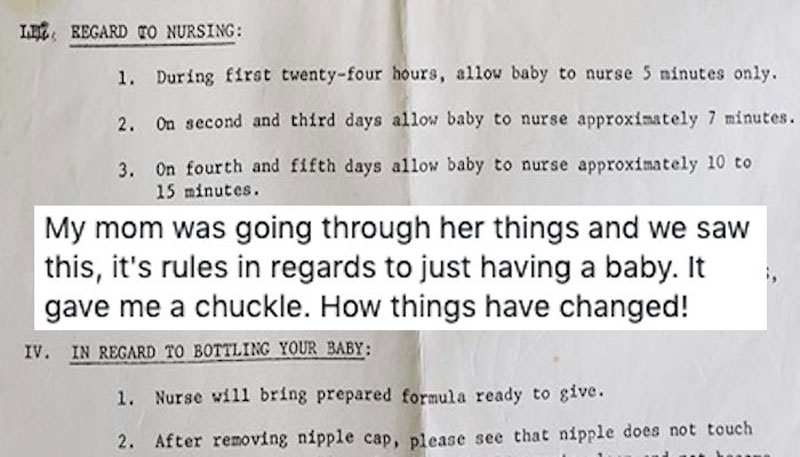 Things were done differently in the past, we’re often told. A good number of folk tell the parents of today that they did things differently and their children survived, so their way must have been perfectly fine too.

Times change though, and when we know better, we do better. Thanks to the pioneering efforts of the mums that came before us, our children are safer than ever before. We now understand that smoking around babies and children is really bad for their health. We ensure that we don’t overheat our babies with blankets or use cot bumpers which are both a suffocation hazard. We have the safest car seats that money can buy, thanks to the laws and standards set following untold tragedies suffered by parents in the past.

When we think of how far we’ve come in child and infant care over the years, it’s sometimes interesting to look back and see what it was like before modern parenting came into play. This is definitely one of those times.

Micala Gabrielle Henson shared a post on her Facebook page, explaining that her mum was cleaning out some of her things when she stumbled across her old hospital instructions from 1968. “It gave me a chuckle,” she writes. “How things have changed! This is from 1968! How cool! Thank goodness things have changed, I can’t imagine!” 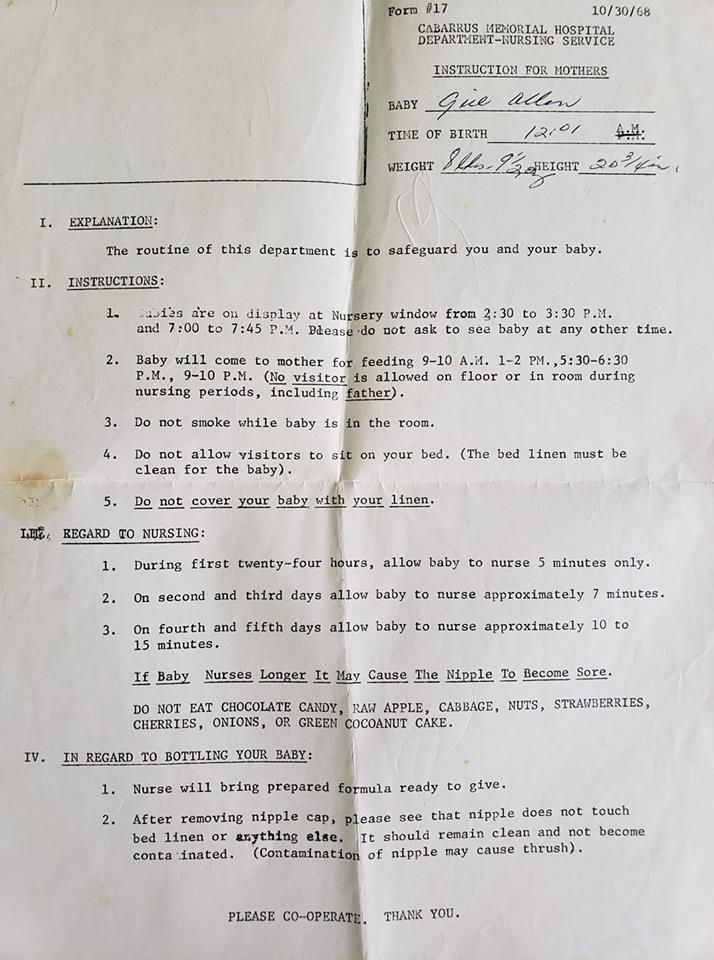 Sooooo, let’s just break this down a little.

New mothers are only allowed to stand at a window to view their baby for a total of one hour and forty-five minutes a day and are requested to not ask for more time than that.

The baby will be delivered to the mother four times a day to be breastfed for between five to fifteen minutes at a time.

The father is not permitted to be anywhere near the baby while it is being fed, which, by the way, is the only time it is not behind a large window in the nursery.

No chocolate is allowed.

“I just thought it was a very cool piece of history,” Henson laughed. She says the initial form was handed out to new mums from a hospital in North Carolina, in the US. “I also thought it was hilarious and crazy!”

Yeah, not so sure about the hilarious part. I bet there were many new mums who were eager to please nursing staff that went along with these ridiculous rules thinking it was the done thing and not wanting to cause a scene. I can only imagine the turmoil these mums must have felt, trying to navigate the transition into motherhood while being denied all the natural instincts we have to simply hold our brand new babies and feed on demand.

Some things are really better left in the past.