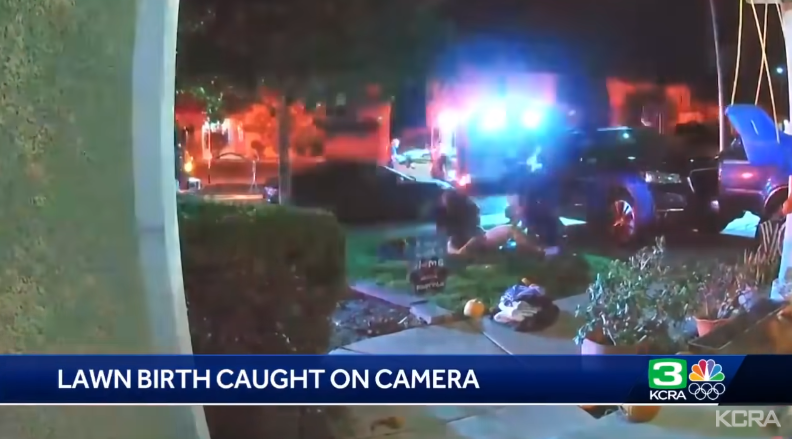 A sweet little boy was in a big hurry last week when he made his grand entrance into the world in his parent’s front yard before they could make it to the hospital. Better yet, the couple had a Ring doorbell camera installed which happened to catch the whole dramatic event!

Emily Johnson, of Vacaville, California, told local news station KCRA that she was on her way to the hospital last Thursday night after going into labour with her son Thomas.

But before she could get in the car, her baby arrived right there on the grass next to the driveway!

“I joke that I was like a cow giving birth in the field because once I got to the hospital, I had grass clippings falling right off me and the nurses were wiping dirt off my knee and I’m like, ‘Oh, I did give birth in the lawn,’ ” the new mum told reporters. “I never want to do that again.”

“The contractions went from three minutes to two minutes to one minute in a matter of 20 to 30 minutes,” Emily recalled. “And we are like, ‘Oh, we got to get into the car we have to go.’ ”

Emily and her husband Michael Johnson grabbed their bags and rushed out to the car, assuming they’d get to the hospital quickly since they live only five minutes away.

It wasn’t until Emily reached the front seat of the car that she realised that she was going to have her baby right there and then.

And that is exactly what she did!

While Emily was laying on the ground, her mum Kristy Sparks arrived just in the nick of time and prepared to greet her newborn grandchild.

First responders also quickly arrived during the moment that was caught on the couple’s Ring camera.

“By the time [first responders] walked up to me, I had a baby in my arms crying,” Sparks recalled to KCRA. “It was unreal.”

“I just laid back in the grass and took a nice deep breath… It was so much pain and discomfort.” 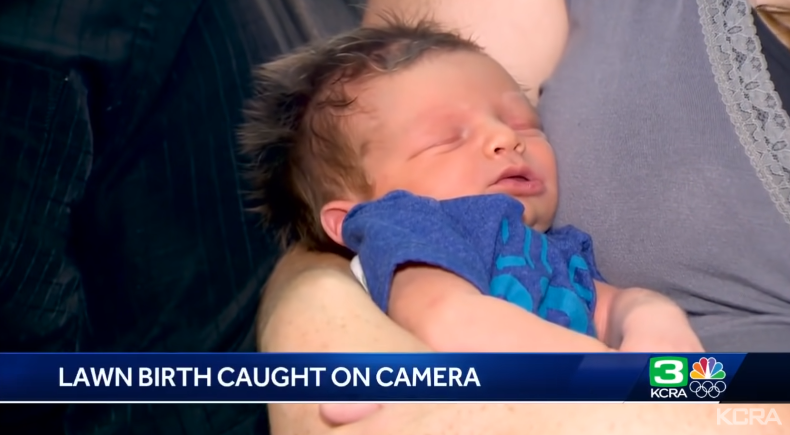 Now at home with their healthy baby, Emily and Michael said they not only have a great story to tell Thomas one day but also some footage to go along with it.

“I was like, ‘Oh, this is going to be on the camera,’ ” Michael explained to KCRA. “I’m going to watch this and we share this.”

“I’m just thankful that I was facing in that direction because otherwise, I don’t think we’d be able to share the video footage with anybody,” Emily jokingly added.

Congrats on your sweet little bundle, Emily and Michael!