Last night, after I’d finally gotten all the kids to sleep, I thought it was about time I treated myself with a cupboard classic, Arnott’s pizza shapes. I’d been thinking about this box of goodness all day long, and how I’d have my way with it once we were all alone.

The mood was set, my favourite television show was on, and the sound of the crisp foil package opening, only served to heighten my excitement.

Quietly, ever so quietly, I opened the packet, not to cause a stir. The rustling, followed by a slight pop, was over in an instant, and the anxiety drew away from my body as quickly as it caused the tension. Home free.

It was all going to plan. The kids were still asleep, I had my comfiest pyjamas on, I was ready to unwind.

All was going beautifully, up until the point I opened my mouth and tasted the “new improved” flavour.

I felt as though I’d been betrayed. It was like a slap in the face from someone I’d trusted for years. I was confused, I didn’t understand what was actually happening. I looked around for someone to help me make sense of it all, alas I was all alone. Hungry, alone and confused. Until I retreated to social media, that is.

Arnott’s pizza shapes have always been one of my favourite savoury biscuits. They were my go to box, whenever I was feeling peckish. The purple packaging had seen me through celebrations, barbecues, late night romantic trips to the kitchen, they’ve seen me through heartbreak, boredom, cheat days, and what some may refer to as just plain gluttony.

After I’d finished the (original flavoured) whole packet in one sitting, I’d like to just sit there and relish in the experience. I’d lick my finger, and proceed to capture and savour the last remaining flavour pockets at the bottom of the crisp foil packaging.

It was a ritual, an Australian celebration, it was a sanctimonious ceremony of rights.

After I’d reverted to social media, it become very obvious, very quickly, that I was not alone in my outrage.

My Facebook status simply read: What. The. F*ck. Happened. To. Pizza. Shapes, and it was as though the flood gates opened.

The pain was felt almost instantly from others who’d suffered the same betrayal of flavour from a company who we’d learnt to trust over the years: 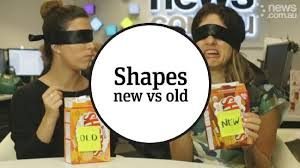 “My boys hate them now!! They’re not happy with the new ‘improved’ flavour.”

“Omg it must be the night for it, once Ruby was in bed I cracked them open and was disappointed. I could have cried lol They are totally yuk!!!”

“All of them, even my kids refuse to touch them! Did you see the new hot dog flavour? I wish they would change them back!!!!!”

“Sebastian only ate bbq and they came home all week! He won’t eat them anymore ! Said they are too strong…”

“Why do they f*ck around with a good thing! That’s what I said to the customer line.”

“Yep with ya. They are terrible. Even threw out some packets. No one would eat them.?”

“I just recently tossed a heap as well, Ruby used to love them now hates them ??”

“The Arnotts fb page is flooded with nothing but complaints. People are going to start a riot lol”

“They are awful I rang and told them too. I also said go back to the original or will lose market share. They sent me chicken and barbecue shapes and they are both ok”

“I’m with ya too , don’t fix what’s not broken , they used to be hit in my house now I had to throw them out.”

“I walk straight past them and pizza was my go to!”

A crime against humanity.

Arnott’s, these are the heartfelt sentiments of your loyal public. Australian consumers. You have been such a huge part of our lives for so long, please listen to your customers and just concede in the fact that you royally screwed up.

The new flavours are un Australian and to be quite honest, offensive.

Please right this wrong and return the old flavours that we hold so dear. There are barbecues to be had, camping snacks to be munched,movies to be enjoyed, cheat days to be relished and parties to be thrown. It seems unbelievable not to include you in the celebrations, when you’ve been such a staple for so long.

What do you think of the new Arnotts flavoured shapes? Are you happy with the taste sensation?