Apparently there is a fetish called ‘preggophilia’ where people get off on photos of pregnant women. These sites contain hundreds of photos of naked pregnant bellies and most are stolen without the knowledge of the owner.

Meg was horrified to find 15 of her pregnancy photos that had made their way onto the preggophilia page for strangers to get turned on by. The innocent pictures she had posted were merely a way for her to share her pregnancy journey with friends and family.

“I see so many people upload their bump pics and now I just gasp and hope to god they don’t get into the hands of someone they shouldn’t,” she wrote on her Facebook page.
“We shouldn’t have to worry about people stealing our photos, but unfortunately it happens all the time.” Mel said “It never occurred to me that people would be totally into a tired, hormonal sweat ball. But they are, so please be aware when sharing pictures online of a growing baby belly.”

That time my bump went viral in a not so good way. This bump pic along with around 15 other pictures ended up on an online “preggophilia” site. Which is a porn site for people who like pregnant women. I see so many people upload their bump pics and now I just gasp and hope to god they don’t get into the hands of someone they shouldn’t. We shouldn’t have to worry about people stealing our photos, but unfortunately it happens ALL THE TIME! When I was scrolling through this god awful site trying to find where this thread was, I saw some pretty fucked up shit. People who were uploading pictures of their wife to other users, brother in laws uploading pictures of their sister in laws and women uploading pictures of their work colleagues!!! I literally couldn’t believe what I was seeing. Who was I to blame for this? People would say I should only blame myself for uploading “personal pictures” and that it was my own fault (even though my profile was then private). I see it differently. I didn’t care that someone had screen shot my photo to show someone, it’s was what they did with my photo that made me physically sick to my stomach. WHYYY should we have to sit and worry about this when uploading a photo on our social media sites? Please be cautious about who follows/adds you. Block them if they look like a creepy MF. Moral of the story, I totes want another bubba and a big Ol’ belly like this again! ??

Meg was first alerted of her photo being on the site when a friend sent it through to her eight months ago.

“My bump was a pretty out there bump, many of my friends recognised it from a mile away,” she said. “I was initially taken aback but I didn’t think too much of it at first until I realised that more than one of my photos had been taken — about 15 all up.”

The person who stole Meg’s photo had posed as a mother herself in an online mother’s group page and went on to encourage mums to share their pregnancy pics. Mothers have been warned of this danger repeatedly and told to be wary of online groups. The Australian Multiple Birth Association (AMBA) said these pregnancy fetishists have been joining pregnancy groups under fake names and then downloading photos of expectant mothers for their own use. “People are posing as parents or expectant mums of twins or more and joining Facebook groups and sharing a photo of their pregnant belly and asking others to share theirs,” Ali Mountfield from AMBA said. 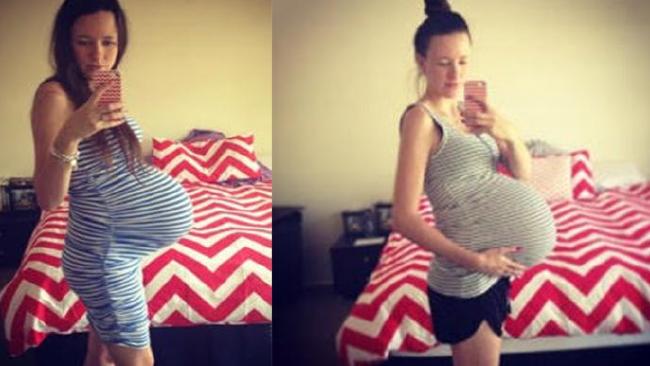 While Meg says people should have the freedom to share any photos they like on their personal social media pages others have blamed her for the incident. They say it’s her fault for putting such personal photos out for anyone to see and copy.

Unfortunately the sad truth is that once you post something on any platform, whether it’s Facebook, Instagram or Twitter, it can very easily be taken without your knowledge and used for any purpose. Which brings up the issue of protecting yourself and your family as much as you can. Try limiting the amount of photos of your children and don’t disclose private information like what school they go to or which sporting team they belong to.

Meg says since the incident she is much more wary of sharing photos online.

“It’s the internet, I know these sorts of things happen all the time, but I was more concerned about how they were used. I don’t share half as much as I did previously,” she said.

“I didn’t care that someone had screenshot my photo to show someone, it’s what they did with my photos that made me physically sick in my stomach,” Meg explained.