Find Out Why This UK Dad’s Ebay Listing for a Secondhand Stroller Went Viral!

If you have ever posted something for sale on Ebay, Gumtree, or your local buy/swap and sell page on Facebook you’ll be familiar with the usual protocol.

You take a few images of the item you’re hoping to pass on to someone else in exchange for some extra cash, and you list all the positive features, right?

Well, Joel Andresier, a Dad of three from Southampton, UK, took a very different approach when listing his green Phil and Ted’s stroller on Ebay. In fact his sardonic, tongue-in-cheek description of the stroller not only sent his listing viral – the secondhand stroller which started biddings at £9.99 sold for £325 (approximately $628 AUD!) 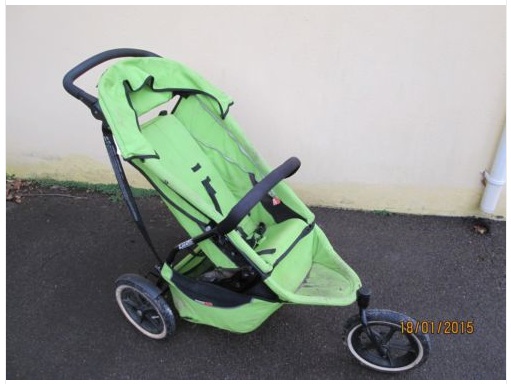 Here we have for sale the green monster that can only be Phil and Teds. I shall be glad to see it leave my premises and never return.

This was purchased against my wishes many years ago as I never wanted any children and a buggy signified my wife’s intent to have children. We argued much and this buggy signifies everything that ended my happy carefree low cost child free life.

Anyway as you can tell I hate the buggy. I now have 3 children, and a Labrador and am forced to endure the school run where women I dont know try and discuss the price of centre parc holidays, and the benefits of the micro over the mini micro scooter. To summarize my life is over and this green albatross needs to go round some other poor sods neck.

On the positive none of my three children were stupidly fat, but its been driven by my wife a lot so not all good. During its lifetime its had pretty much every bodily fluid known to science, (and several that have yet to be discovered) chucked over it by my children, Its also absorbed its own weight in Ellas Kitchen meals, and mud.

I have tried to maintain this item as best I could and the wheels were filled with green slime to prevent punctures, and WD40 has been used with gusto on the relevant parts. It even comes with what I lovingly refer to as the Cinderella attachment for the second child you have but dont love as much as the first. It means they can sit but cant see anything, and have a ride thats about as comfortable as a Ford Model T.

All of my children are now walking (often in completely the wrong direction) but someone else deserves to give this a good home. Over the years I have collected spare bits from other zombified fathers who were once full of life and I will throw these in as well.

According to the other half she has the baby carry item that came with this and the pannier bags (whatever they are) but she never used them and they are immaculate and will be listed when she conquers her fear of heights and gets into the loft.

This buggy has never been used for dog sledding, racing, or buggy bumper cars, although I once used it to concuss a randy Alsatian that tried getting amorous with my lab.

There are many adverts on here for immaculate models and these people are all liars and scoundrels as nothing that comes into contact with a young child is ever immaculate.

So for a starting price of just £9.99 you too can screw up your life. There are programs for those of you who need to recover from drugs or alcohol. Any money generated from this sale will be used to help me recover from children (and probably involve drugs and alcohol)

So spend big – its for a good cause…

Collection only from SO31 7FB – Cash on collection is fine.
Your welcome to come and view it or take samples for further scientific analysis…

But Joel’s fun seemingly didnt end there. In answer to an Ebay user that asked “Please could you publish details of the eventual highest bidder? I need to contact him/her (probably a him…) as I have similarly heavily stained items I need to get rid of before the wife gets back from her mother’s,” Joel answered “Not until I have had a chance to relist my magic beans.”

In fact referring to the amount of comments he received Joel wrote “I have had 1000+ a day since Monday…… I am doing my best to read them all and respond to as many as possible.  They fall into 5 main types. – The lovers – Your funny/a legend/a hero -The haters – Your disgusting and a child hate…/etc etc – The stupid questions – Why is the buggy this much/ will you get paid/ Are you Jon Ronson??? – The shared stories – of woe, suffering, marriage, children, and projectile vomit – The indecent proposals – some wonderfully suggestive ones with numbers included (strangely these have slowed since my picture was published online).”

You can read more of the hilarious comments here

Which camp would you fall into? Do you see the funny side of Joel Andresier’s Ebay listing, or do you think he went too far?