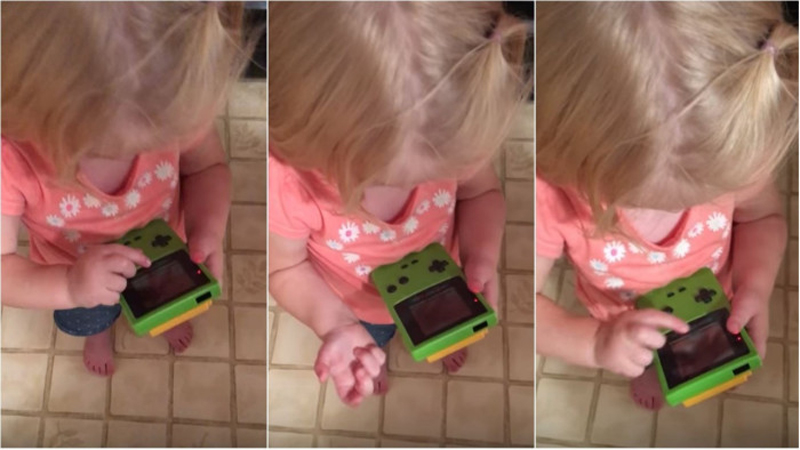 It’s hard to remember a time when modern technology didn’t exist. I mean, the type of smartphones we are all familiar with have only been around for ten years with the release of Apple’s first iPhone in 2007. Before that we just sort of made do with buttons like a caveman, I guess.

So it is understandable that today’s children are so used to touchscreens that they are absolutely flummoxed when met with a device that doesn’t have a touchscreen function.

Take this adorable little girl, for example. Her reaction to this “old school” Game Boy Color — which was released in 1998 — is priceless!

My daughter attempting to play a Game Boy Color in the age of touchscreen interfaces. from videos

The way she turns her little hand over as if to say “what the hell?” is just gorgeous. And you can tell that she’s confident that she’ll figure it out by the way she refuses her father’s help and quickly turns away. Although without a backlit screen, she’s not going to have much luck going into a dimly lit room.

The father of the little girl posted his video to Reddit, where it received thousands of upvotes and comments.

“I saw a different video where a toddler tried to pinch zoom a magazine,” wrote one Redditor.

“My girlfriend works in a preschool and they have lessons on how to use a computer mouse. The kids are totally proficient with technology but many have only ever used touchscreen devices,” added another.

This generation of children has grown up streaming whatever television shows, music or movies they want to watch at the touch of a button. They have never known anything but being able to Facetime Nanna on a whim or playing a vast amount of free games on an iPad or computer. It isn’t a bad thing, it’s just different.

Technology shifts with every generation, but that doesn’t make it any easier to see our children have such a disconnect with the toys that we loved playing when we were younger!