SOS Shopping with My Kids! 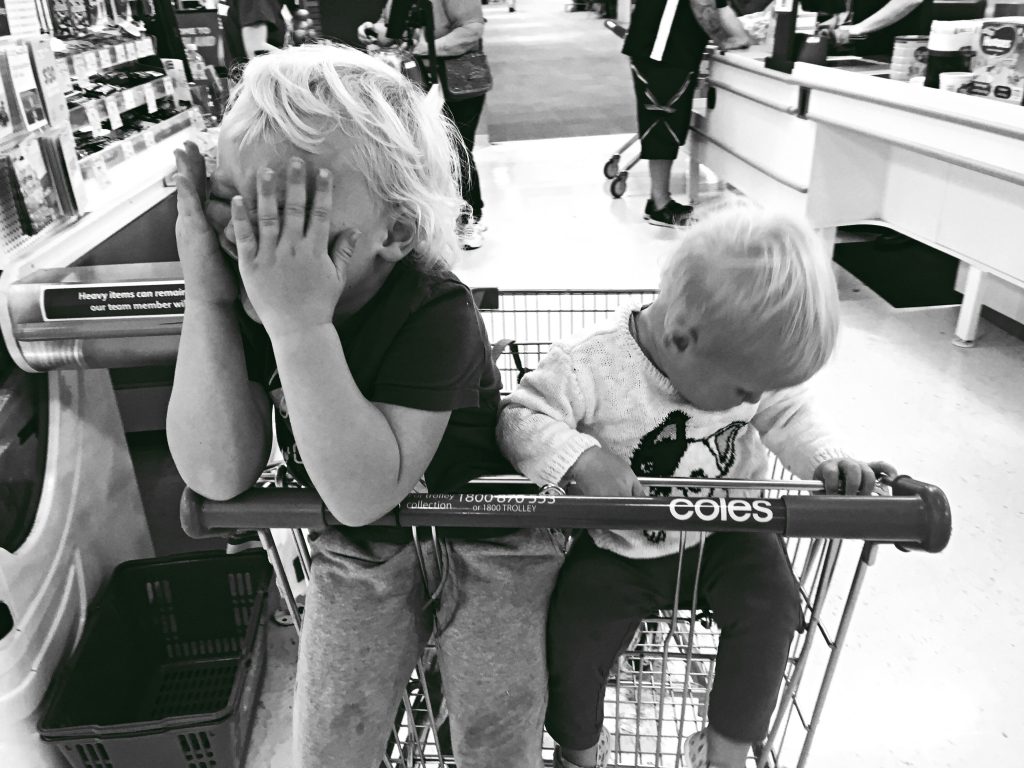 SOS Shopping with My Kids!

What had started as a mildly average outing, normal to most, generally those sans children, rapidly escalated, deteriorated and inevitably fell catastrophically apart! The Hurricane had clearly woken up on the wrong side of the bed, one of those hanging, menacing moods that hit you, knock you flat on your face and leave you thinking to yourself “wow you’re going to be an a*#hole today” or for want of a better mum approved word ‘difficult’!

Argumentative and angry with the world for reasons I will never understand, cupboard rations running low, I hedged my bets and bundled the Hurricane and his sister, the Little Ray of Sunshine, into the car and braced myself for shopping with the kids, food being a necessity!

Scurrying and grabbing the larger, two seater trolley the Hurricane immediately informed me that my strategic plan to strap both children in would not be flying today, instead firmly grabbing the handles of said trolley, cleverly jumping aboard the back and swinging like a crazed chimpanzee on an out of control go-kart. After navigating the fruit and veg aisle at an awkward snails pace I decided that this position, however entertaining it may be, was not optimal for my shopping efficiency. Taking the pensive passive approach I attempted to reason rationally with the irrational and negotiate a scheme whereby he’d agree that it was much more practical for him to be seated. Wishful thinking! Passive was met with precocious and the tears, hysterics and orchestrated misery started flowing. 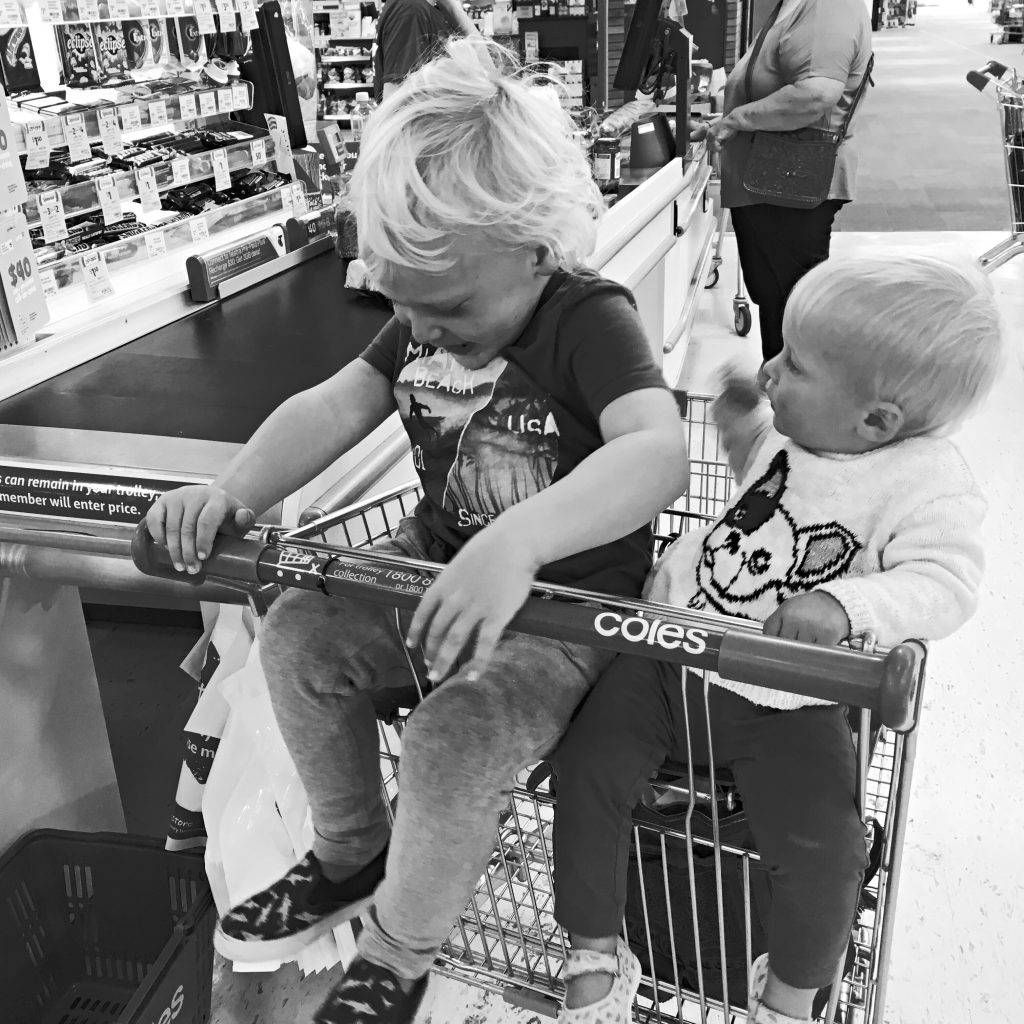 Making my approach I swooped in for the lift, crying firmly established there was now no turning back, I may as well take the inevitable hit and try to re group. Legs and arms flailing, narrowly missing his now ducking and weaving sister the best I could do was get him into the cart of the trolley, not designated for transportation of children but a relatively effective way of keeping them contained.

Pushing on to the next aisle, the healthy aisle, fantasies of nutritious, organic based treats floating through my mind as a mother that’s clearly got her s*#t together, the Hurricane, still flailing, made his attempt at escape, screaming and teetering precariously close to the tipping point of the trolley. Lunging and scooping him up the tantrum shifted into next gear switching from flailing to a now limp and lifeless sack of potatoes that had mysteriously lost his ability to stand! Heaving and hauling my now deadweight toddler I move to place him to the ground as elegantly as humanly possible where he, 0f course, dramatically falls in a heap. Cue the ridiculous and unrealistic threats! To onlookers not privy to my toddlers dramatic flare, I have now, not just abused my child dropping him to the floor but I am quintessentially berating him for it!

Last ditch effort and with a lift worthy of any cross fitter I manage to get him into the designated trolley seat buckled and locked in. Winning! Strolling now, somewhat subdued with a subtle, silent, snivelling sob from the Hurricane and a smug grin stretching slowly across my face I was thinking, “Yes!”

We were on the downturn, nothing could stop us now, the worst was over with minimal permanent damage and we could get through the last of the shop looking relatively close to a functioning family…that was until my daughter, my baby, our Little Ray of Sunshine, quiet up until now, took one look at her brother crushed and already defeated and decided screw it, one in all in and started smacking him repeatedly up the back of the head…Game over ! 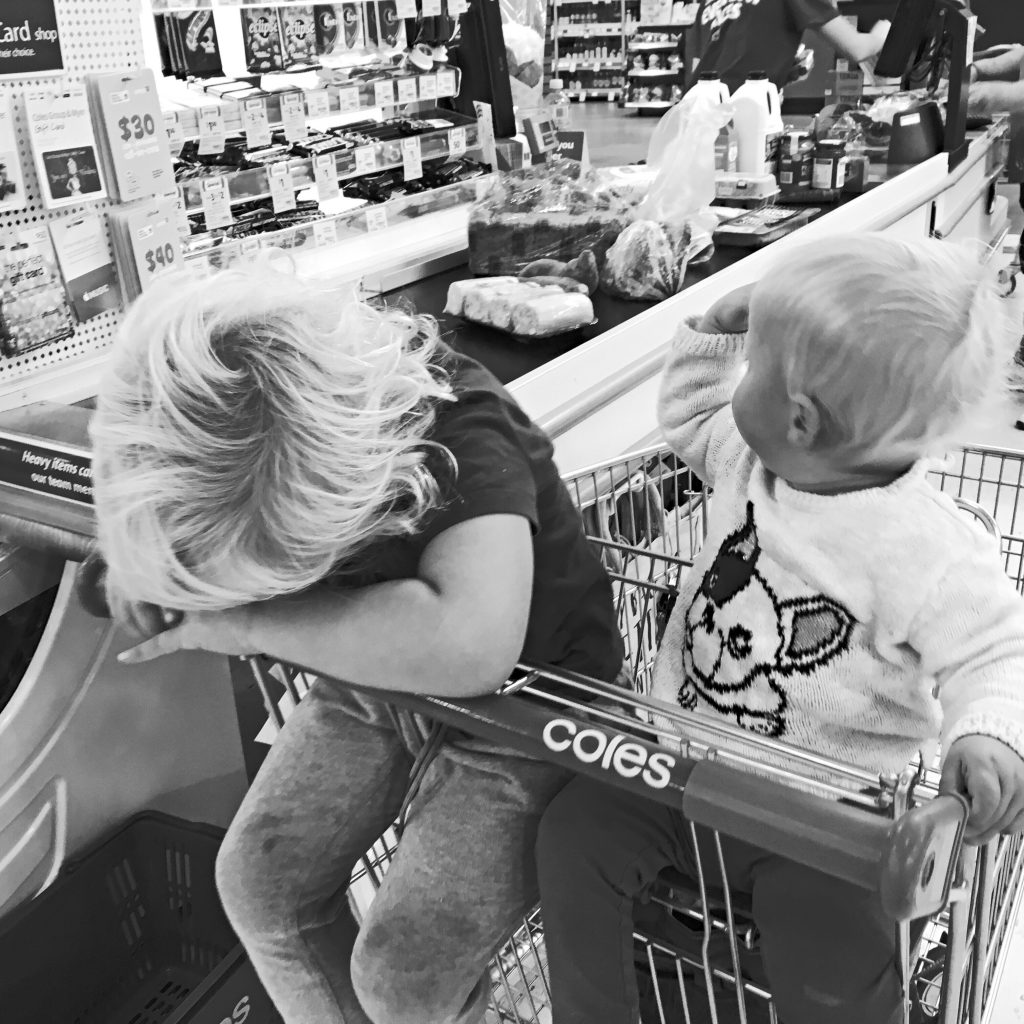