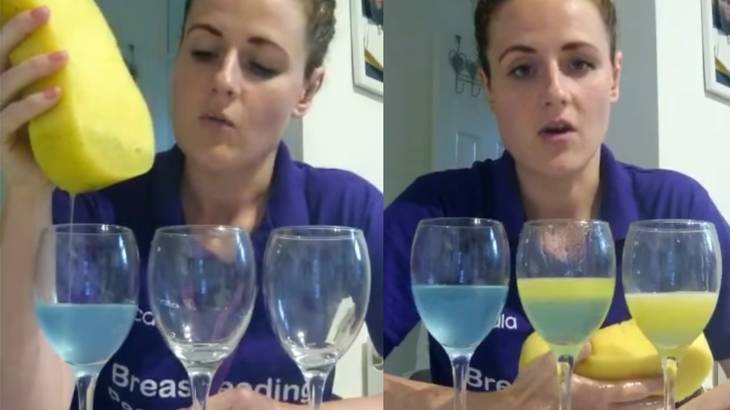 How do you know if your breastfed baby is getting enough milk?

That’s a question that all breastfeeding mums ask themselves at one time or another. It’s not like you can see exactly how much milk your baby has consumed, can you?

Breastfeeding Peer Supporter Nicky Gibbon explained the three stages of breastfeeding in a video that is very helpful in visualising how much of each type of breastmilk your body makes for your baby.

In the video, Gibbon mixes water with oil and soaks it up with a sponge. Holding the sponge over the first wine glass, she explains that the first stage of breastfeeding is the thirst-quenching part, with lots of blue water pouring out of the sponge to demonstrate this first phase. “It has a high water content,” she says, “and it’s packed full of glucose to wake baby up.”

“And as the letdown slows, baby will fall into a more rhythmic suck/swallow/breathe pattern of feeding,” she continues, squeezing the sponge over the second glass as it fills with part oil and part water. She begins to mimic it by taking slight pauses in between squeezing the sponge, to show how a baby pauses to take in deep breaths.

“There’ll be pausing to let the larger fat molecules in, or pass,” Gibbon explains, “and you can see in the second glass that there’s more fat than the first.”

She adds that you’ll notice your baby doing one to two sucks per swallow at this point.

“At the end of a feed, baby may flutter and it may be really tempting to take baby off at this stage as it can seem like they are not doing much at all,” Gibbon explains, as the water from the sponge spills messily over her hands.

But leaving them on a bit longer is crucial she says, as she notes that the water in the wine glass shows “what they would have missed on” – high-fat, high-quality milk.

“It is needed for weight gain and to satisfy their hunger,” she says, adding that “the fat molecules at the end of a feed are so large that babies flutter to allow their tongue to manipulate those really large fat molecules out.”

Her explanation is a fascinating take on what really happens when we breastfeed, and it is reassuring to know that our little ones aren’t just faffing about at the end of their feed, they are getting all of the best quality milk!