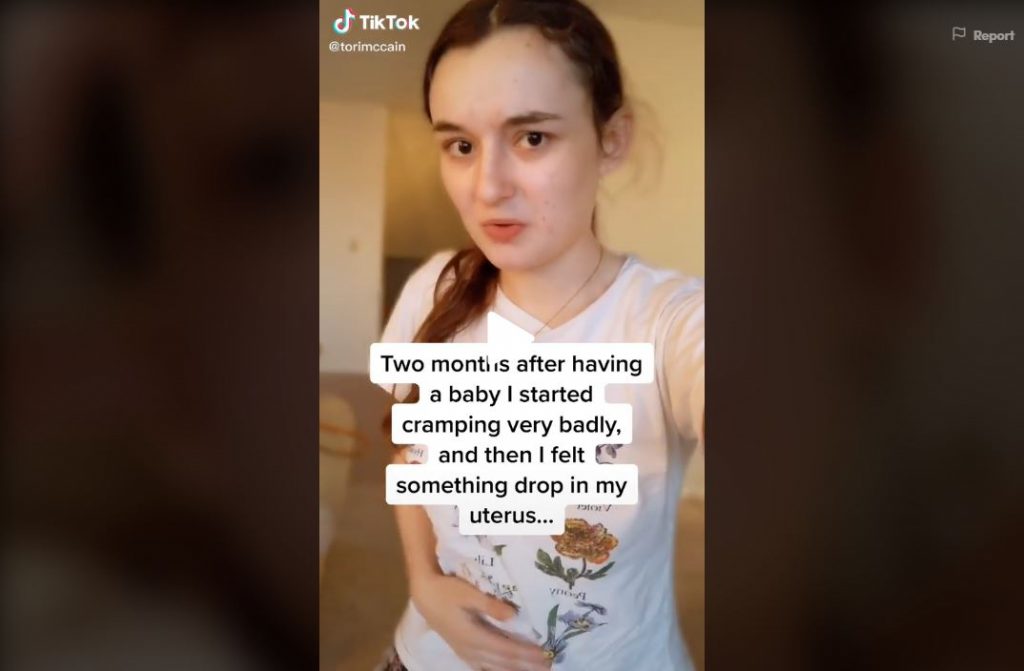 Recently, 22-year-old Tori McCain shared a video on TikTok of a curious incident that occurred while she was visiting her mother in law. She felt intense cramping in her abdomen and made a dash to the bathroom. While in there, the new mum felt something “drop” in her uterus.

Tori shared a funny TikTok clip explaining the bizarre event to her friends by imitating her husband and mother in law’s reactions, reaching hundreds of thousands of viewers.

“[I was] freaking out thinking my insides were falling out, and also thinking I was gonna die,” McCain explained in her viral TikTok about the experience, which has over 700,000 views to date.

After rushing to the bathroom, Tori was horrified to see “a piece of tissue hanging out”, a spectacle that freaked out both Tori and her husband. As it would any of us, no doubt.

Her mother in law came in to see what all the fuss was about and advised the couple to go straight to the hospital. Upon arrival, a doctor informed her that her delivery doctor had left a piece of her placenta in her uterus when she gave birth two months previously.

Understandably shocked, Tori was amazed that she hadn’t developed sepsis from the piece of tissue.

The medical term for what McCain was dealing with is called a “retained placenta.” It happens in 1-3% of deliveries and is the second leading cause of significant (sometimes fatal) postpartum bleeding, according to research published in 2019 in the International Journal of Women’s Health.

Key symptoms of a retained placenta are abnormal bleeding or hemorrhaging. Other symptoms include increased pain or cramps postpartum, as well as a foul-smelling discharge and a fever, which could be a sign of infection.

“Bleeding after birth is normal for about two to four weeks because your uterus is shrinking, but you should not be passing tissue,” says Dr Sherry Ross, MD, ob-gyn and author of She-ology: The Definitive Guide to Women’s Intimate Health. “If all of a sudden you’re passing tissue or clots bigger than an apricot, that’s a reason to call your doctor and check-in.”