Pregnant Woman Sits on a Man’s Hand on the Bus Because He Refused to Move It – Was That Inappropriate? 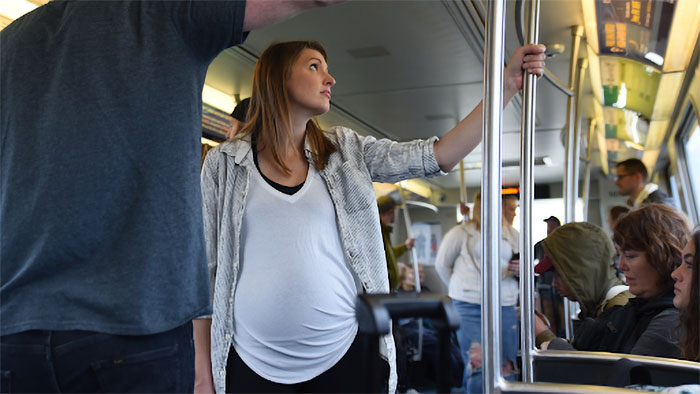 Pregnancy is tough. The last thing we want to do is stand up on public transport after a long day on our feet. As if being heavily pregnant isn’t exhausting enough!

So when one mum-to-be politely asked a fellow passenger if he might move his hand from the spare seat next to him so she could sit down, his refusal was met with her bum, quite literally.

The anonymous 30-year-old first-time mum explained that she takes the bus to and from work every day, even at 8 months pregnant. Oftentimes people would offer to give up their seats for her, but on this occasion, there was only one seat left on the bus.

“I go to sit but I find a guy in his business attire sitting there with his hand resting on the empty seat,” she writes. “I say excuse me and ask him to remove his hand so I could sit, but he tells me the seat was “taken”.

“I ask “by who?” and he says his hand. I laughed a little but wasn’t feeling well so I ask him to move it so I could sit but he refuses again.”

At this point, she noticed that other passengers began to watch the unfolding drama. She explained to the man that she was tired and needed to sit down but he replied by saying that her pregnancy wasn’t his problem.

“I had enough at this point, my legs were burning and my back was hurting, so I go ahead and sit on his hand.”

“He freaks out and tries to remove it quickly while shouting at me. He then starts arguing about how disrespectful I was to do this inappropriate thing and in public no less.”

The woman said that she argued back with the now irate man who got off the bus after saying she “was being inappropriate and disrespectful”.

“Everyone stared at me and I just sat there feeling a bit of shame about what happened.”

But here’s the clincher — her husband agreed with the man on the bus!!

“I tell my husband about this incident and he wtf’d the entire time, then says that I did indeed act inappropriately and shouldn’t have made this guy uncomfortable by sitting on his hand like that. He tells me I fucked up and this was totally inappropriate despite me saying I was so tired of standing and was in desperate need to sit down.”

Hoo boy, would I have some choice words to say to both of these men!

Thankfully, those in the comments section put it very clearly themselves.

“I hope you farted,” added one helpful Redditor.

“Was that my mucus plug?!” offered another.

“Weaponizing your butt was inappropriate, you should have shot him in the hand like a civilized person,” remarked a third.

The woman added that she doesn’t usually expect people to give up their seats for her on public transport and that she is grateful when offered. But this man’s hand was just one step too far.

What do you think? Would you have “weaponized your butt” too?

One thought on “Pregnant Woman Sits on a Man’s Hand on the Bus Because He Refused to Move It – Was That Inappropriate?”