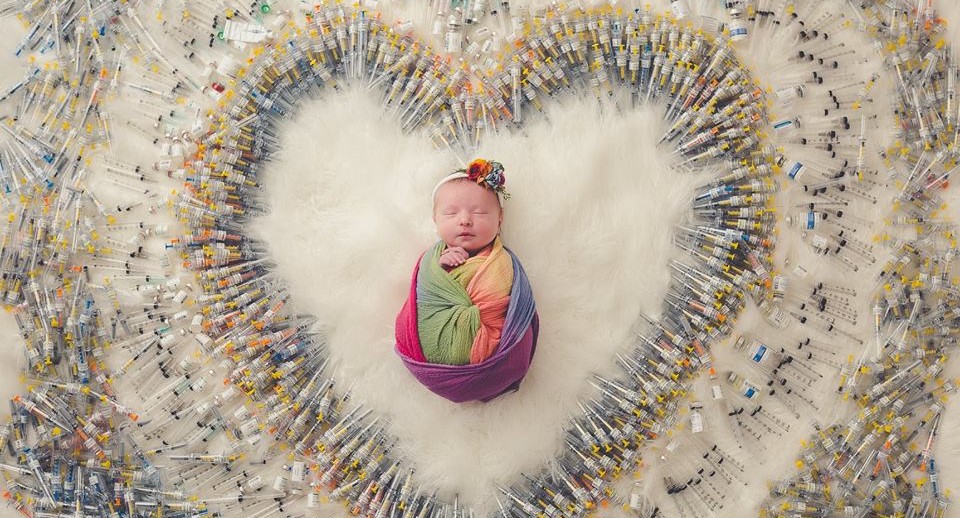 A photo of a tiny newborn baby swaddled in a rainbow cloth and surrounded by over 1,600 needles shaped to form a heart has gone viral, demonstrating the emotional and physical struggle that many couples go through when they try to conceive.

The amazing image was taken by Arizona photographer, Samantha Packer, who shared it with her Facebook followers, the image and the story behind it capturing people’s hearts.

Patricia and Kimberly O’Neill met almost six years ago while both were working at a daycare centre. They fell in love, got married, and knew they wanted to have a baby together.

In 2014, a year into their relationship, they started trying to conceive. Although the women have one child each from previous relationships, they wanted one of their own. They decided Patricia, now 30, would carry the child.

“We just thought it would only take going into a fertility clinic and nine months later, we’d have a baby,” Patricia said. “It just didn’t happen like that for us.”

After four years of trying, seven attempts, three miscarriages and 1,616 injections, the O’Neills finally welcomed their daughter to their family when baby London O’Neill was born on August 3. 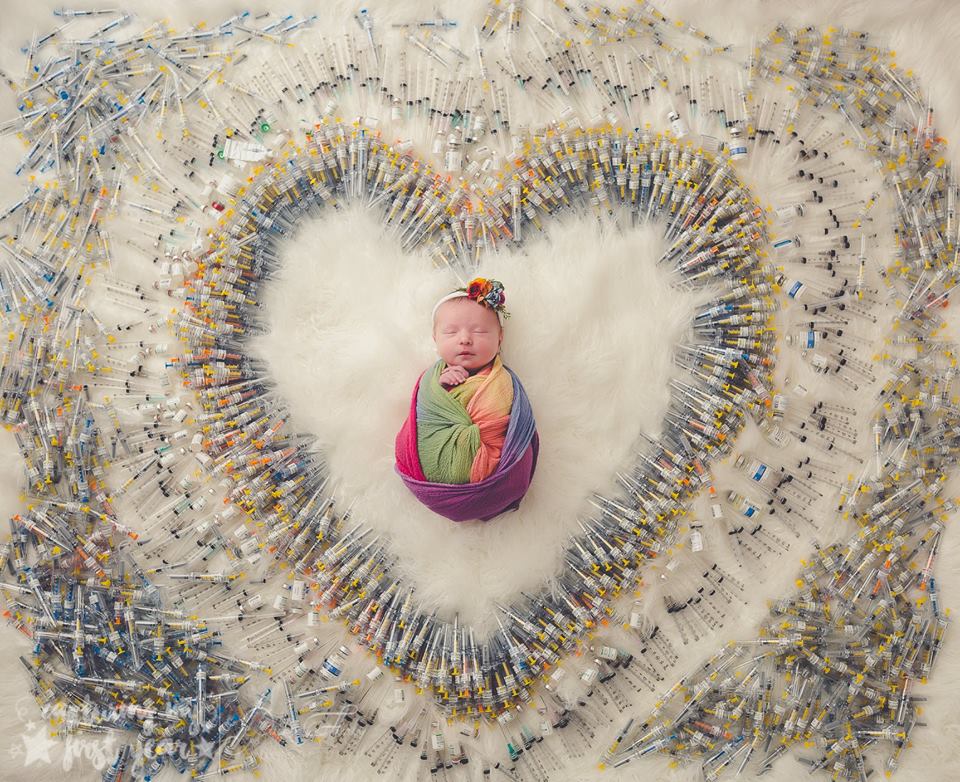 Newborn photographer Samantha Packer said she has taken dozens of photos of rainbow babies, which are babies born after a mother has lost a baby to miscarriage, stillbirth or infant loss. But this one was different.

Patricia explains: “My wife saved every single needle that I injected, all capped and plastic seals around them and everything.”

The heart around London is made of the blood-thinner needles that Patrica had to take twice a day. The next ring shows the many IVF injections that her mum received. It took Packer more than an hour to meticulously lay out the syringes all pointing in the same direction.

“The heart symbolized … that this whole painful journey was all to love a child,” Packer told CNN.

When the O’Neills arrived for the shoot just one week after London was born, they saw the heart-pattern of needles and were overwhelmed, Packer said.

“They instantly started tearing up,” Packer said. “I think that’s why the photo resonated with so many people. The journey, the goal and the baby, it was a lot.”

“As soon as I looked at the back of my camera, I thought it encompassed the beauty, the hardship and the love of it,” she said. “It was all worth it.”

The emotional photograph has since gone viral on Facebook, where it has received more than 67,000 shares and resonated with thousands of people who understand the difficult journey.