Sonia Kruger opens up about miscarriage fears in recent pregnancy. 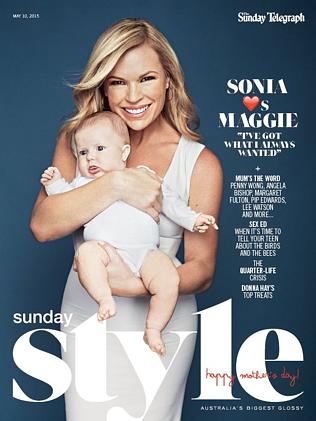 Sonia and Maggie on the cover of Sunday Style magazine

Sonia Kruger has opened up to Sunday Style about the fear she felt before and during her recent pregnancy.

Sonia and her partner Craig experienced many miscarriages before getting an egg doner and welcoming their little girl Maggie into the world in January this year.

Sonia has described the moment they decided to use an egg donor was scary and confronting.

‘It dawned on me that if I really wanted to have a baby, it was not going to happen using my own eggs, it took a long time for me to come to terms with that decision. I don’t think that’s ever an easy decision for women to make.’

She also revealed that she was so scared of miscarrying, she googled buying a home ultrasound machine just to check on the baby when she felt anxious.

‘I even Googled buying my own ultrasound machine, my own Doppler, so I could check her heartbeat constantly because I was so paranoid something would go wrong.’

On a positive, Sonia said that the feedback from fans has been overwhelming and encouraging.

‘Ninety-nine per cent of people who have written to me have been so wonderful and have lots of amazing stories’, she said.