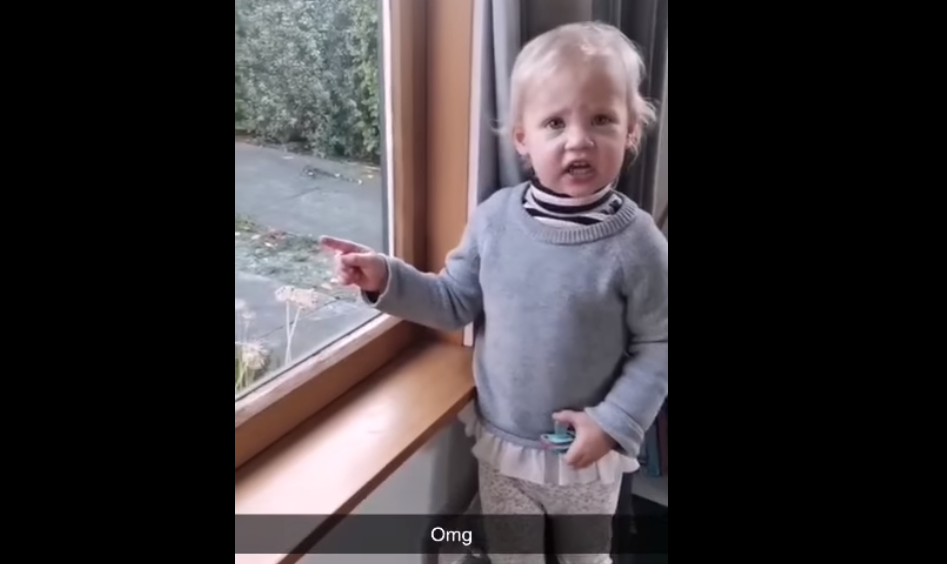 If we ever needed a reminder that toddlers are little sponges when it comes to soaking up and repeating what their parents say, this is it.

Adorable two-year-old Ivy Smith has become a viral hit on social media after parroting her mother’s sweary realisation that they had a visitor in the front yard of their suburban home in Christchurch, New Zealand.

“It’s a f*cking goat,” mum-of-two Sophie Smith yelled as she reached for her phone to film the unlikely visitor about 4pm on Friday.

This is the part that made young Ivy sit up and pay attention.

Ivy, perched on a toy oven peering out a window at the goat, mimicked her mother saying “a f*cking goat’s outside”.

“It’s just a goat,” Sophie urgently corrects her, but it is too late. Her cheeky toddler again points out the window saying, “No, it’s a f*cking goat!”

Sophie initially shared her video through Snapchat with a few mates before posting it to a local Facebook group to find out who the stray goat belonged to.

But she soon had several responses urging her to repost the video. So she did, posting it on TikTok and Facebook. The short 10-second video has since gone viral, with the post garnering more than 4 million views on the TikTok app and being shared widely on Twitter, Facebook, and Instagram.

Sophie said she was blown away by the massive online response to the video as she had never had a video go viral before.

“I’ve had a lot of really positive comments from people who have said that it’s just made their day and all they needed was a laugh and that they’re really appreciative that I shared it … and then I’ve also had quite a few hate comments of people saying really negative things.”

Sophie reiterated that neither she nor her children swear like this on a daily basis. But honestly, even if they did it wasn’t anyone else’s business but her own.

She ended with a classic response to the naysayers:

“If anybody says that they’ve never sworn before … have a goat come into your property and then tell me otherwise.”