Caesarean deliveries are not always looked on with favour by pregnant women and medical professionals. If a woman can give birth naturally, it’s believed to be the best way for mum and bub. Many mums may disagree with that notion if they have experienced a traumatic natural labour and birth.

Of course there are circumstances when a caesarean is a must for the health of mum and bub.

Unfortunately some women can have dreadful caesarean deliveries too.

The one thing we can all agree on is that every woman’s birth experience is different and valid.

The gentle cesarean is the opposite approach to a typical c-section delivery. 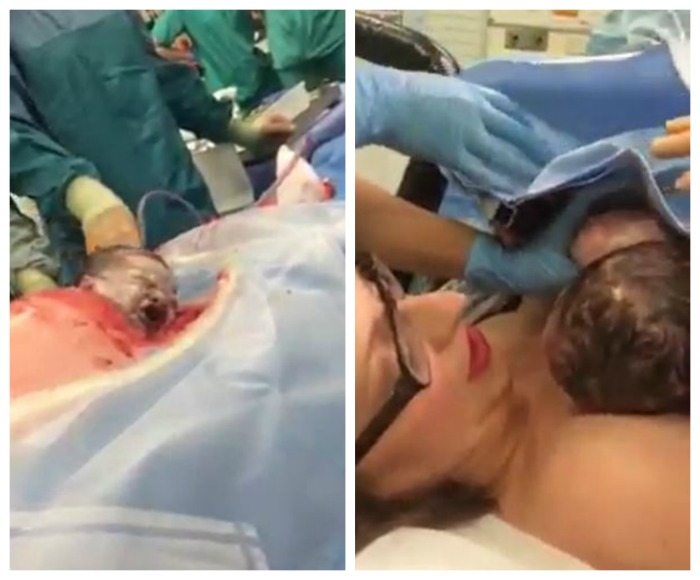 A gentle caesarean starts with the screens up and sterile routines in place, but when the incision is made, the drape is lowered to allow mum to see the full delivery of her baby. As the baby’s head enters out of the incision, the surgeon is hands-off and the baby essentially is birthed through the incision, or as medical terminology explains it, ‘the baby autoresuscitates: breathing air through the exteriorised mouth and nose, while its trunk still in utero remains attached to the placental circulation. This delay of a few minutes allows pressure from the uterus and maternal soft tissues to expel lung liquid, mimicking what happens at vaginal delivery. Once crying, the baby’s shoulders are eased out, and the baby then frequently delivers his/her own arms with an expansive gesture. Concurrently, the baby’s torso tamponades the uterine incision, minimising bleeding’.

After the baby is born, they are placed onto the mum’s chest straight away. In usual caesarean deliveries, the baby’s umbilical cord is cut and the baby is whisked away to be cleaned, checked by a paediatrician, measured and weighed and brought back to mum’s chest while she is being ‘sewn’ back up.

Often breastfeeding is not introduced until a few hours after birth depending on how the surgery goes and whether mum has had an epidural, spinal block or gone under general anaesthetic.

The gentle caesarean approach is a different experience for both the mother and medical team.

One mum in the UK who wanted to have a gentle caesarean, had to find a hospital that would allow the procedure to take place.

Sophie Messager, a doula from the UK, shared how her friend had a gentle caesarean and included a video of the birth which has gone viral and is beautiful to watch.

The post and video were uploaded yesterday at 6:35pm has since been viewed over a million times and shared by over 13k likers. 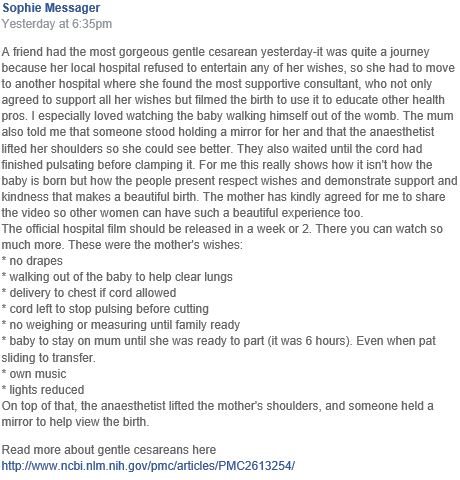 A friend had the most gorgeous gentle cesarean yesterday-it was quite a journey because her local hospital refused to entertain any of her wishes, so she had to move to another hospital where she found the most supportive consultant, who not only agreed to support all her wishes but filmed the birth to use it to educate other health pros. I especially loved watching the baby walking himself out of the womb. The mum also told me that someone stood holding a mirror for her and that the anaesthetist lifted her shoulders so she could see better. They also waited until the cord had finished pulsating before clamping it. For me this really shows how it isn’t how the baby is born but how the people present respect wishes and demonstrate support and kindness that makes a beautiful birth. The mother has kindly agreed for me to share the video so other women can have such a beautiful experience too.

The official hospital film should be released in a week or 2. There you can watch so much more. These were the mother’s wishes:
* no drapes
* walking out of the baby to help clear lungs
* delivery to chest if cord allowed
* cord left to stop pulsing before cutting
* no weighing or measuring until family ready
* baby to stay on mum until she was ready to part (it was 6 hours). Even when pat sliding to transfer.
* own music
* lights reduced
On top of that, the anaesthetist lifted the mother’s shoulders, and someone held a mirror to help view the birth

It may not be every mother’s dream birth experience, but it’s good to hear of different birth approaches so that mums can make an informed decision with their medical team on what they would like to happen during their c-section.

Many of the concepts of the gentle caesarean are being employed by hospitals in Australia.